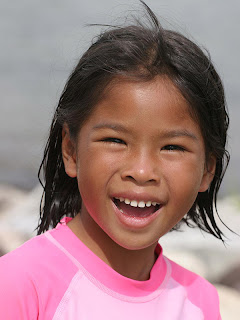 Here's something inspiring for all of us, something which we can learn. And it comes from a handful of youngsters.

First we have Aaliyah Yoong Hanifah (pic). She is only 8 but has already created history by winning the Sea Games gold medal in the women's water ski tricks event.

Note Aaliyah competed in the WOMEN's event and not in some Under-12 or Under-15 competition.

Then we have an American teenager who refused to quit from a cross country event despite having dropped a number of times. He eventually dragged himself across the finish line.

Outside sports we have Thomas Suarez, who at the age of 12, owns a company - CarrotCorp - and has invented two iOS apps.

Perhaps it is time we learn from the young.