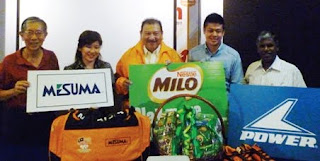 Traditionally and rightfully, the Olympic Council of any country is responsible for the preparation of the athletes prior to any multi-sports event.

Not in Malaysia though.

Here you get the funding arm of the Sports Ministry, the National Sports Council (NSC) playing an extremely "active" role in everything - from supposed sports development to organising the flag handing ceremony for the Sea Games bound contingent.

Olympic Council of Malaysia (OCM) admits flag handing ceremonies were traditionally hosted by them until the NSC took over.

This time around there are two events instead of one event as seen before the team leaves for Indonesia. A sponsorship ceremony hosted by OCM yesterday and the flag handing ceremony organised by NSC at a hotel in Putrajaya this afternoon.

Even OCM president Tunku Imran Tuanku Jaafar diplomatically agreed it has always been OCM's job to host such a do. Read more here.

After all, isn't the OCM a bigger and more independent entity than the NSC?