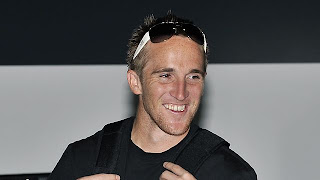 After winning the Sea Games gold medal followed by two straight defeats in the pre-Olympic qualifiers, the lads will now head back to their respective teams.
Singaporean journos are eager to do a build up of their Young Lions playing in the Super League next season. However, they are clueless as to the fixtures.
Prior the Sea Games, this was raised but I was told to "relax la brother" and wait after the Sea Games. Why? Well the Sea Games team manager Hamidin Mohd Amin is also the competition committee chairman.
Wasn't there talk of a Cambodian club joining the league next year? What happened to that?
Fixtures asides, we now have a sudden influx of foreign players trying to impress our teams here.
The latest is Australian Michael Baird (pic) who will play alongside Brendan Gan for Sabah.
And the states have received a Royal Warning as FA of Malaysia deputy president Tengku Abdullah Sultan Ahmad Shah said teams need to adhere to the guidelines before obtaining the services of an import player.
Hopefully we won't see an Ivan Ziga episode. The Slovakian was not paid by Sarawak and threatened to lodge the matter to Fifa.
Then again, our local lad Jeremy Danker seems to face the same predicament with Sabah after being given the boot earlier this year.
A gentle reminder to the coaches - do watch your words as you could be penalised.
So much of drama, and the league has yet to begin.
HD says: Looking forward to an exciting 2012 M-League.
FAM football M-League Michael Baird