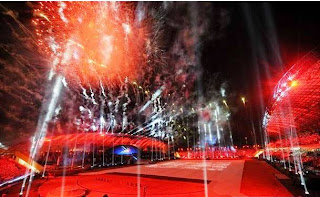 I am sure my fellow Media friends and our national athletes were mesmerised with the fireworks display during the opening ceremony of the 26th Sea Games in Palembang yesterday.

However, it's been a dramatic start even before the Games were declared officially open.

The shooting team arrived in Indonesia without ammunition and will now have to fork out some RM20,000 because of the slip up.

Then we had the badminton coaches "receiving a stinking welcome" to their rooms as reported here.

And on a sad note, we lost Cikgu Harun Osman who passed away after suffering from a heart attack.

“We realise we cannot make everything perfect, but with all our heart we are trying our best to prepare everything for the participants here in Palembang.”

All the best to our national contingent in Indonesia. Go break some records and make us proud.