Tigers on a prowl 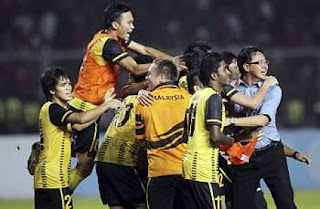 The Malaysian U-23 team defended their Sea Games title after edging Indonesia 4-3 in a penalty shoot out. Both teams drew 1-1 even after extra time.
Two fans were killed at Gelora Bung Karno.
Firecrackers were lit in most parts of KL.
The backpages will be plastered with pictures of our players celebrating. Oh yes, there will be faces of officials who will shamelessly take credit as well.
But where do we go from here.
In hardly 24 hours, coach Ong Kim Swee will be part of the team manager's meeting at Wisma FAM (3pm) ahead of the Malaysia-Syria pre-Olympic clash.
Both teams will play on Wednesday night at the National Stadium in Bukit Jalil. Then the national team will take on Bahrain on Nov 27.
The standard of play seen throughout the tournament wasn't that great - but for the exciting grand finale.
Thailand has lost its grip as the regional power house. Singapore still has got a lot of catching up while Indonesia are still struggling to find their grip and are desperate for any title. Vietnam too seem to have lost the plot.
Malaysia has the upper hand at the moment but for how long before the other countries reign supreme.
Let's not be complacent and start working slowly but steadily for bigger titles.
Well done to Kim Swee and the Harimau Muda lads. You deserved to win.
Pic: NSTP
HD says: Personal note to Khairul Fahmi Che Mat, screw those who took pot shots at you. You're still the region's best.
indonesian khairul fahmi che mat Malaysia Ong Kim Swee Sea Games