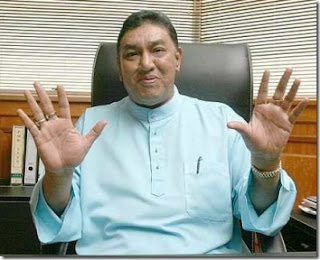 Sepaktakraw Association of Malaysia president Ahmad Ismail (pic) insists he should not vacate from the "kerusi panas" (hot seat) and will remain as president until after "sepaktakraw achieves success".

Read more in today's The Star.

Ahmad is not stranger to controversy, as evident here.

Perhaps Ahmad has a grand master plan to see Malaysia win the ISTAF World Cup or the King's Cup. Or perhaps achieving "success" means managing to beat South Korea in any competition.

However, Ahmad made a valid point.

“What about other sports which failed to win medals?

There are associations helm by presidents for years and they have not tasted glory. Athletics is one of them.

There is also a situation where athletes fend for themselves without the help of any structured training programme and yet win medals - like snooker.

And Ahmad, what is your definition of success? To win a Sea Games gold medal? Or to win the World Cup?

HD says: If only people will have the interest of sports in their hearts. Sigh!
Ahmad Ismail sepaktakraw