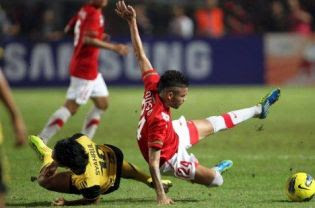 Malaysia coach Ong Kim Swee was asked to leave the bench and sat at the stands with some 30 minutes left in the game.

Yet, that did not stop the Malaysian Tigers from silencing the almost 90,000 crowd at the Gelora Bung Karno in Jakarta. Malaysia edge hosts Indonesia 1-0 in the final group match of the Sea Games football competition en route to topping the table.

The national defenders put up a brilliant performance, frustrating the Indonesians - who were more notable with their funky hair-dos, unique names and nice tattoos instead of their football.

It must be noted Indonesia rested several of its key players. But make no mistake, Indonesia's ego are bruised and they will be eager to bounce back

Perhaps they will be able to avenge their defeat against Malaysia in the final. As Indonesia coach Rahmad Darmawan was quoted by Jakarta Globe;

“This is a wake-up call and should motivate the players to be better in the next match."

With that in mind, let's not get carried away.