Hockey: Where do we go from here? 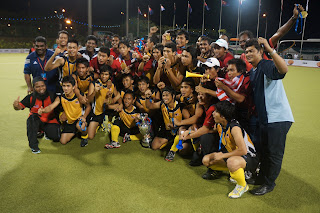 The national Under-21 hockey team made a remarkable comeback to edge Australia 3-2 win inaugural Sultan of Johor Cup in Johor Baru yesterday.

Both teams were tied 2-2 after full time but it was Mohamed Noor Faeezwho scored the winner of the match in extra time.

For reports of the match, read here, here and here.

So where do we go from here?

There were times where the boys played well. There were also times when the boys failed when it comes to simple passes.

K.Dharmaraj or now known as Muhammad Dharma Raj Abdullah has done well to guide his boys for this tournament. Now lets hope for some consistency as a bulk of these lads are expected to graduate into the senior team.