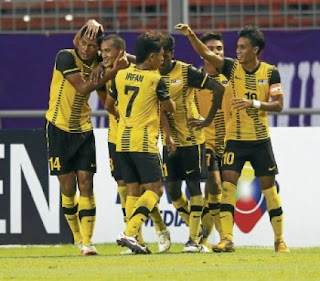 It doesn't get any better now does it.

Indonesia are set to take on defending champions Malaysia in the football final of the 26th Sea Games in Jakarta.

Both teams met in the group stage which saw Malaysia edge their not so gracious host 1-0.

But will the Malaysians have the upper edge again?

Indonesians are eager to bounce back and they are on a mission. Even prior the competition, the Indonesian team 'pledged to restore national peace and unity', as reported here.

The Malaysians will have to face the hostile Indonesian fans and once again be bombarded with jeers of Balik Balik, profanities and even be given the 'middle finger' throughout the game.

Indonesia played with mostly reserves in their earlier clash with Malaysia. The Malaysians, meanwhile, are a tired lot as evident against Myanmar.

However, if the team play their hearts out the Malaysian Tigers could once again silence the crowd as the Gelora Bung Karno. They may return to their hotel rooms in army tanks instead of just Barracudas but rest assured they will be hailed as heroes once they reach KL.

Many were skeptical and even questioned why Ahmad Fakri Saarani is part of Ong Kim Swee's list but he silenced his critics by scoring the winner against Myanmar en route to putting Malaysia through to the final.

It will be an uphill battle playing against the wounded Garudas. But if we keep our cool as we did in the earlier match against Indonesia, we can pull it off and stamp our mark as the best team in the region.