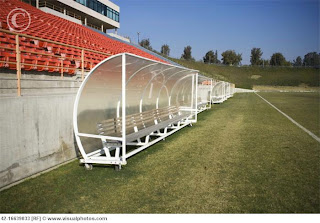 UPDATE 9.46am: Read what Hassan has got to say here.

There was one coaching staff missing from the sidelines during the Olympic qualifier Malaysia-Syria match on Wednesday.
Assistant coach Hassan Sazali Waras was no where to be seen throughout the match.
And he will not be around when Malaysia play Bahrain in Bukit Jalil on Sunday and in Riffa come February.
Hassan was slapped with a six match suspension for "offensive behaviour" in 2009 during the AFC Under-19 Championship. He has missed four matches to date.
It remains unclear if Hassan was the real culprit or his name was wrongly reported - as per his claims.
But Hassan has adopted a new role during his time outside the bench - to watch the opponents from the stands.
Let's hope his new role will help the Olympic side edge Bahrain in the coming matches.
HD says: If Ong Kim Swee is sent out of the pitch while Hassan serving his suspension, goalkeeper coach Yong Wai Hwang will take charge and I believe he has the capability to shoulder such a responsibility.
football hassan sazali waras olympic qualifier