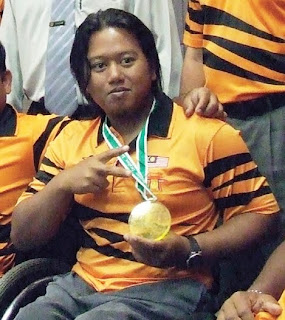 He had that rebellious rocker look.

But Salam Sidik (pic) was a humble man.

So humble that in 2009 when he was named world no 1 in (paralympic) archery, he was unfazed and remained the cool, calm man he always was.

And all Salam wanted was to do was to compete with his able bodied counterparts. His dream was to also strike gold at the London Paralympics next year.

Sadly, we will no longer see him achieve his dreams as
Salam passed away at 1pm today.

He was brought back to his hometown in Sungai Tiram, Johor, according to Bernama's report 'Pemanah Elit Paralimpik Negara Meninggal Dunia'.