Forget about Visi Sukan Negara. What is Malaysia's sport philosophy? 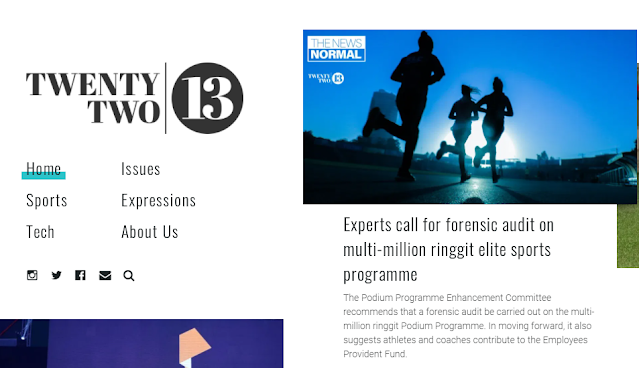 On March 24, I revealed the contents of the report submitted by the Podium Programme Enhancement Committee. Read news website Twentytwo13 for the highlights.

Yesterday, I wrote that the committee, had among others, recommended that a forensic audit be carried out on the multi-million ringgit elite athlete programme.

While writing my article yesterday, I was informed that a group of individuals had gathered at Taman Perindustrian Puchong earlier in the morning to get their thoughts about the soon-to-be-launched National Sports Vision (Visi Sukan Negara).

And I was informed that the one thing that was highlighted - what is the guarantee that the sports vision will be followed through over the next 10 years, especially when a new minister (or two) comes in?

I had also raised this in the past.

And I doubt anyone can guarantee that the government officials in Wisma KBS will follow through with the vision. After all, they will be forced to serve the wants and needs of the new minister.

A similar line of thought was seen in my Jan 4, 2021 article 'Political instability could disrupt Podium Programme revamp, Malaysian sports' published in Twentytwo13.

It was about the findings of the Podium Programme Enhancement Committee. I wrote:

It seems that the minister and the ministry officials are committed to realising the findings (of the committee). But here are several questions that linger:

Now, what is my fascination with the report by the Podium Programme Enhancement Committee? Also why do I keep harping about the need to make the 2017 SEA Games accounts public?

It involves tax-payers' money. As such, these reports should be out in the open as they serve as a guide so that the same mistakes, if any, will not be repeated in the future.

Is that too difficult to understand?

And since the National Sports Vision seems to be more of a collection of "hits" from the past (similar to those Now That's What I Call Music albums), it's best that the wise decision makers at Wisma KBS concentrate on existing programmes and strengthen them instead.

For starters, the ministry should look into the findings of the Podium Programme Enhancement Committee so that it would not be seen as another wasted effort by the group of experts.

p/s: To the decision makers in Wisma KBS, if you have read the committee's report that was submitted last September, look at the recommendation that states the need for a sports philosophy in Malaysia.

Reading that reminded me of my conversation with Associate Professor Dr Megat Ahmad Kamaluddin Megat Daud after recording Bar None on radio station BFM. He said, as published on Twentytwo13 in July 2019:

“It also boils down to what our sports philosophy should be. Sadly, till today, we don’t have one.”