Is Annuar Musa eager to take over KL football? 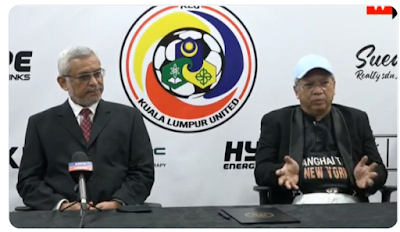 Tan Sri Annuar Musa (pic: right) and Kuala Lumpur football - these two subjects kept cropping up during my series of meetings with senior Umno leaders and politicians over the past week.

While the conversations were mainly about Umno's preperation ahead of the looming GE, as published in Twentytwo13 today, those I met kept saying that Annuar Musa is keen to have a stake in Kuala Lumpur football.

But it's a rather 'messy' affair.

Khalid remains as the head of the association. But replacing Khalid as FT Minister is Annuar Musa - an Umno man who has pledged his alliance to Tan Sri Muhyiddin Yassin despite constant threats by Umno leaders to pull out from the ruling, yet fragile, Perikatan Nasional coalition.

Annuar Musa is also president of Kuala Lumpur United FC - the team that plays in the M-League - and played a role in the change of name to Kuala Lumpur City FC. That created some drama which is best kept for another day.

Annuar Musa is a football man whom I have known since his days running Kelantan FA. He was also part of the FA of Malaysia.

His peers seem to suggest that Annuar Musa is eager to have a huge stake in the Kuala Lumpur club.

Perhaps Annuar Musa sees the potential of the grand plans laid out by club CEO Stanley Bernard in turning the city side into a powerhouse.

Also, in Malaysia, it will be easier to get things done with a serving FT Minister within the system compared to a former minister who is now an opposition member.

Some of the posers raised by the politicians during our conversations:

P/s: Has anyone seen KL's 'star signing' Devinder Singh lately? I've noticed his website SportsTimes has been active since March 1. For the record, he was hired as the club’s media and communications executive effective Jan 1.