Thanks Lee Zii Jia! Politics and everything else finally take a break 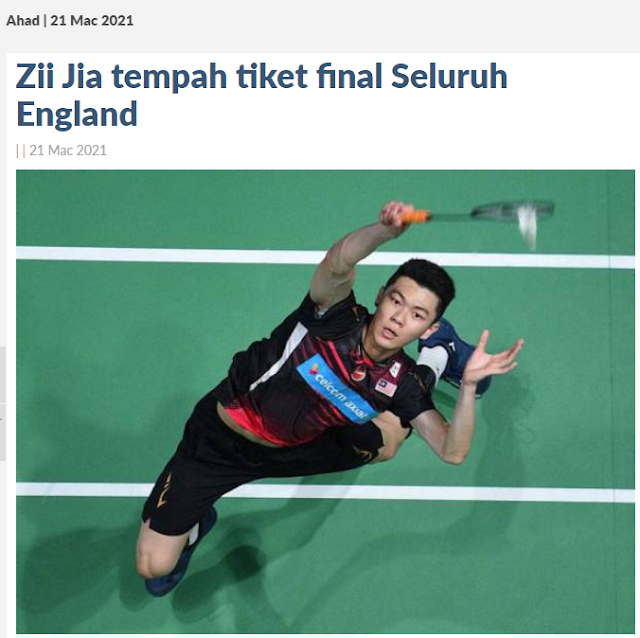 Finally conversations over dinner and in Whatsapp groups are no longer about politics. Phew!

Regardless the result of the All-England final tonight, I bet people will still be talking about Zii Jia's exploits tomorrow and perhaps the day after.

It's the kind of distraction and entertainment Malaysians need right now - not discussions about the nation's nauseating politics or depressing economic situation.

Thus it saddened me that when Prime Minister Tan Sri Muhyiddin Yassin had launched the National Blueprint for Unity last month, only Communications and Multimedia Minister Datuk Saifuddin Abdullah saw the need to speak about sports as a unifying agent.

That too he made in passing, perhaps not wanting to offend the Youth and Sports Minister.

Earlier this month, Singapore unleashed plans to push its football to greater heights.

"Uplifting Singapore football will be a national project, and I encourage all of us to rally around this common goal. It is a sport which can unite Singaporeans of all ages, races and genders.

"There has to be a collective unity to pursue a shared goal, all of us, working together, united, pulling in the same direction, for this project to have a chance. We will continue to do our best to build a sustainable and resilient football ecosystem which Singaporeans can be proud of.”

I hope Zii Jia's road to the All-England final where he will play Viktor Axelsen in the final tonight (7pm) will finally open the eyes of the powers-that-be in Malaysia. It's not just about throwing your support and forgetting about badminton tomorrow.

It's about realising the power of sports.

Thanks, Zii Jia and all the best!