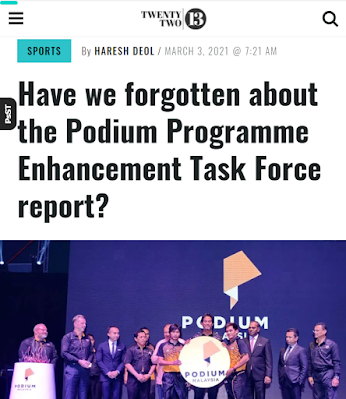 This was published on Twentytwo13 earlier today:

Click Have we forgotten about the Podium Programme Enhancement Task Force report? to read the article.
I wonder if anyone has gone through the report, page by page. Baca lah. Dah enam bulan, sure berhabuk by now.
Some names were mentioned in the report too. I also wonder who from the government agencies should be "realigned".
Just make the report public la. Let it be an education process.
What the committee said is based on their series of interviews - kalau betul, just tambah baik and, if required, remove certain people some their positions. Kalau tak betul,  just explain to the committee why it was had erred.
Kan senang?