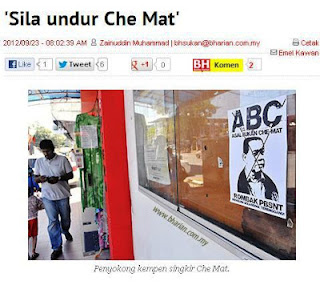 Sadly, there wasn't any category for 'most dramatic football association of the season' in the line up of the 64th Primetime Emmy Awards.

Is it a call of just one fan, 10 fans or majority of the fans?  It remains unclear.

But what is certain is that the call for Che Mat to step down came after Terengganu coach Peter Butler was suspended and fined for highlighting indiscipline among his players to the Media prior the approval of the FA.

The Englishman appealed against the decision yesterday.

Butler was quoted by Bernama as saying;

"It is important for me to regain credibility as a coach after my actions to discipline some players but I was instead severely punished by the suspension and termination of contract.

"I don’t think this is a good signal for Terengganu football and for Malaysian football as well."

The state FA will now meet within the next seven days to decide over Butler's appeal.

The FA of Malaysia (FAM) are ready to play cupid in this matter as announced by Tengku Abdullah a couple of days back. However, the national body can only step in if Butler writes to them.

All this drama reminds one of Butler's days with Kelantan and the draconian Article 88 which saw Kelantan FA president Annuar Musa penalised, which surprisingly - despite all the criticism - still exists within FAM's constitution.

Moral of the story, decisions should be given much thought before they are executed. And once the execution process begins, you stick by it.

Then again, do people actually think before making decisions?

Just like a Sinetron drama, the episode in Kuala Terengganu keeps getting 'better' (or worse if Indonesian mid-day dramas ain't your thing).

Note: The author is not undermining the decision made by Terengganu FA and believes that all FAs should not be easily threatened by the sentiments of certain parties - provided the decision made is fair and just.

HD says: The only ABC I like is air batu campur. Sadly with this sore throat and fever, I won't be able to have any for the time being.
che mat jusoh emmy awards peter bulter terengganu FA