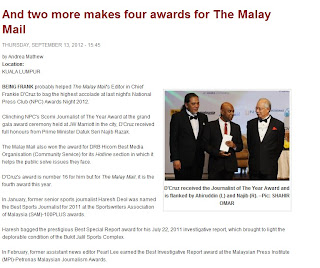 Congratulations to Frankie for he derserves it. Also, it is hope that the award for the "Hotline" section, which is surprsingly missing from the newspaper in recent times, will be re-introduced in the near future.

I believe it is also right to congratulate Frankie for being the new Editor-in-Chief of the Malay Mail.

And I must thank the Malay Mail for remembering those, including yours truly, who left the good establishment recently.