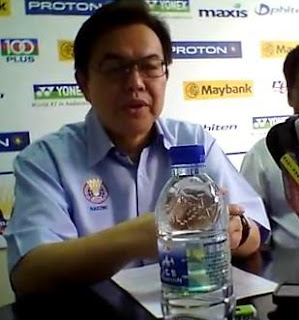 BA of Malaysia president Nadzmi Salleh spoke to the Media after the Exco meeting yesterday. Here are two points taken from an 18:05s video clip from Satwant Singh’s blog.

Point 1
“We deliberated at length, about Koo (Kien Keat) and Tan (Boon Heong)..you know there are a lot of opinion about this pair…this pair has approached us. They would like us to consider giving them the last chance for the World Championships next year.

If they can’t make it by the time of the World Championships or don’t perform well, we have other partners to partner them. The target for them must be very clear and the exco recommended they must at least make it to the final.”

In short, Kein Keat and Boon Heong will remain as a pair until the World Championships next year. This contradicts NST's report yesterday that said;

However, the exco is expected to be firm and will inform Kien Keat-Boon Heong that there will be no turning back in January and that they must play with their new partners if they wish to be part of the national team.

Let's give Kien Keat and Boon Heong their final shot at glory before writing them off for good, shall we?

Point 2
“We found the problem with High Performance director (s) is that to find the person… we all agree the structure will not change much but the problem that we are facing today is to find the one body to fill in the position, this is the biggest challenge I think we cannot find somebody that has the competency for the job…to really perform.

So if we can find a manager..a manager would be a person who has strong managerial abilities and qualities because managing is getting results by working with other members of the organisation. If you have a high performance director, he must be very technically competent and also a good manager. And I think to have both qualities in a person is almost impossible."

In short, the three High Performance directors have somewhat 'failed' and BAM now needs a Project Manager. After all, from the three (Wong Ah Jit, Ng Chin Chai), only former shuttler James Selvaraj has technical knowledge of badminton.

Do note that a good player need not necessarily be a good coach or tactician.

That aside, BAM will create a new position. Why talk about 12 years (three Olympic cycles), when it remains unclear if BAM will be able to find anyone before the 2016 Olympics.

Nadzmi did rightfully say it is not easy finding the perfect candidate.

And note the "confusion" and clarification between members of the Press and Nadzmi at the end of the video. Having many layers will turn BAM into another paranoid corporation that is more interested in looking good on paper but will get little work done.

If the structure has not been discussed, why make an announcement?

Nadzmi, who has managed big organisations, should know better. Just my two cents worth. After all, I'm just a journalist.