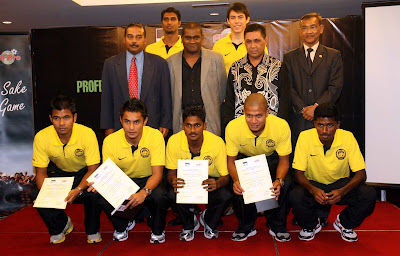 National striker Safee Sali has called for the setting up of a professional football players association to look into their welfare and rights.

Safee, who plays for Indonesian club Pelita Jaya, said this was necessary as Malaysian football was undergoing a transformation and players needed an active body to protect their interests.

“The recent controversy involving two Terengganu players highlights the need for such an association.

“I sympathise with them for having to put up with such a shameful situation,” he said at the ‘SYM Hari Raya Open House with Safee Sali’ in Alma yesterday.

That was taken from a Bernama report.

Perhaps our top national striker is unaware of the Professional Footballers Association of Malaysia.

Then again, does anyone know about PFAM?

I remember writing about its existence last year - PFAM...who?

And to refresh one's memory - this was written by Tony Mariadass in 2009 - For the sake (sale) of the Game?

HD says: Everyone wants to be in the limelight by doing nothing.
football PFAM professional footballers association Safee Sali