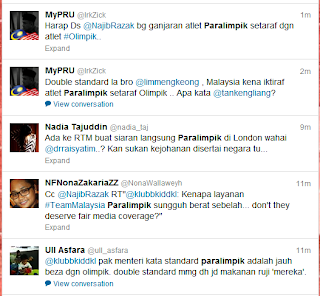 UPDATE 8.30am: As many continue to speak about giving our paralympians equal rights, here is an article I wrote on the same subject last year - Robbing 'em blind.

Ironically, that article is still the 'latest highlight' on the Malaysia Paralympic Council website.

Once again our Paralympians hog the limelight.

There's also Faridul Masri, who despite missing out a place on the podium by finishing fourth, set a new Asian record of 36.78m in the men's javelin (F54/55/56) event.

However, there are those questioning to the lack of support and publicity of such achievements. The vast difference between the reward system has also taken center stage.

I have been invited as a guest on Astro Arena (801) at 11am to discuss such matters.

But there still aren't any highlights or news from the Malaysian Paralympic Council as seen on its official website. If there's hardly any recognition from the guardian Council, what more from others?