"He loved sports till the end" 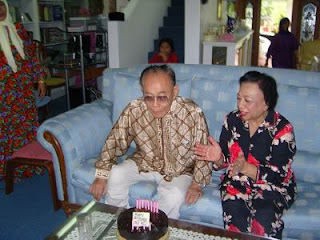 Shahril Hamzah and I have one BIG regret.

We never got down to writing a book on Shahril's dad Hamzah Abu Samah.

Shahril and I worked on several stuff together in the past including the Royal Selangor Club 125th Year Anniversary coffee table book. And since then we have been toying with the idea of writing a book about Hamzah.

Shahril, who I believe was extremely close to his dad for he often spoke volumes of Hamzah whenever we met, had lost his voice but he had this to say;

"He loved sports till the end."

"And yes, we never got down to writing the book and that is my biggest regret."

Born on Januari 5 Januari 1924 in Pekan, Pahang, Hamzah received his early education at the Kajang Malay School before studying at the Malay College Kuala Kangsar in Perak. He continued his studies in England reading law before graduating as a Barristerat At-Law, Gray’s Inn, London in 1953.

Upon returning from England, he served as a deputy public prosecutor, among others, between 1954-1967.

He quit the cabinet after undergoing a coronary by-pass in 1980 and started his own business.

Hamzah was well known for his passion in sports.

He was president of the Olympic Council of Malaysia (OCM) since 1976 and was a member of the International Olympic Committee since 1978.


Besides football, he was president of the Malaysian Cricket Association (1969-1990) and enjoyed stints heading the national taekwondo body.

Hamzah was among those who played an instrumental role in bringing the 1998 Commonwealth Games to Malaysia.

The funeral will be held today after the Zohor prayers (1.30pm) at Masjid Negara.

Note: Picture of Hamzah cutting his birthday cake with his wife Toh Puan Zainon Hussain by his side in 2008. Courtesy of OCM.