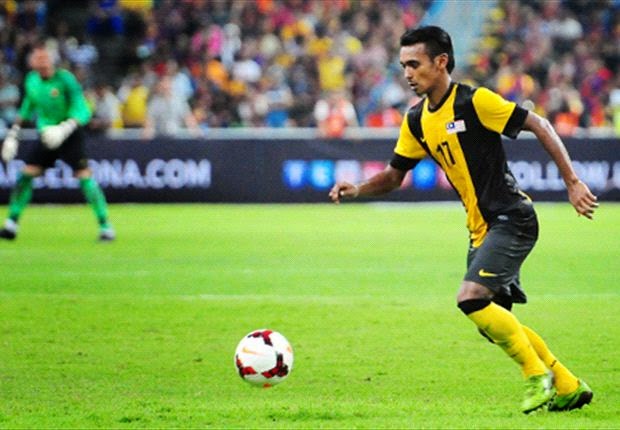 PETALING JAYA - Malaysia head into the Asean Football Federation (AFF) Cup as underdogs but forward Amri Yahyah is not a single bit perturbed by it.

In fact, he insists he likes it that way.

“I prefer being the underdogs,” Amri said.

“Remember, in 2010 we were not the favourites but we went on to win the competition for the first time in our history.

“We are in the same situation now, who knows if we end up winning the tournament again. The key is getting everything right during the competition.”

Amri would likely feature in the starting eleven alongside clubmate Norshahrul Idlan Talaha when Malaysia play Myanmar in the Group B opener on Sunday.

Harimau Malaya face a difficult prospect of reaching the knockout stages as the odds favour Thailand and hosts Singapore to progress based on recent form.

Malaysia only have one win to parade since Dollah Salleh took charge in July.

The forwards - Amri, Norshahrul, Safee Sali and Abdul Manaf Mamat - have all struggled to find the back of the net so far. Amri and Norshahrul even fluffed three good chances against Vietnam after a dominant first half.

Yet, Amri reiterated Dollah's enthusiasm that they will come good during their tournament.

“The run-up may not be ideal but on the positive side we have improved a lot in terms of our build-up play,” said Amri, who had scored two goals in five friendly matches.

“I am ready to play with anyone upfront but I feel the combination with Norshahrul is clicking. We do have other good options but it is up to the coach to decide.”

Norshahrul, who has kept away from the spotlight in face of criticism after missing a crucial penalty in the Malaysia Cup final, was a key player in Harimau Malaya's historic title winning campaign in 2010 but has somewhat faded in recent times.

He only played a bit-part role for his club Johor Darul Takzim last season and has already agreed to reunite with B. Satiananthan at Armed Forces next year where he hopes to revive his career.
"Norshahrul will be back at his best during the tournament ... the same for the rest of us," said Khairul Fahmi, who is better known as Apek.

"Our strikers are not regular starters in the M-League but I believe they will come good. Our friendly matches have not been satisfactory but this is not the time to sit and sulk.

"Time is short so we have to make the most it. Let's all focus on our mistakes and work our socks off in training. We must show we can challenge the others."

Khairul Fahmi rubbished suggestions the team was struggling to cope with pressure after successive friendly losses to Syria and Vietnam this month.

"Sometimes, being under pressure is good. Not only does it ensure we are not comfortable, it also pushes us to prove a point," concluded Khairul Fahmi.
AFF Amri Yahyah Asean Football Federation football khairul fahmi che mat Norshahrul Idlan Talaha