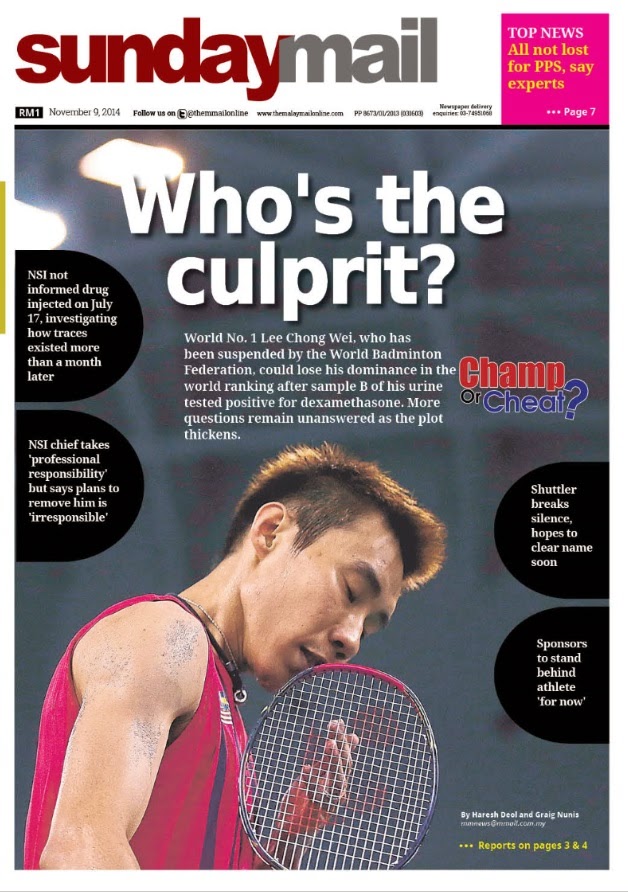 As published in Sunday Mail

KUALA LUMPUR — Traces of a banned substance were apparently “high enough” in Lee Chong Wei’s urine sample as investigations revealed the drug was administered during the shuttler’s stem-cell surgery on July 17.
Insiders claim the dexamethasone injected into the world No. 1 was part of the surgical procedure usually carried out if the surgery “under anesthetic took longer than usual” to avoid the patient from suffering from severe nausea and vomiting.
“But the National Sports Institute (NSI) was not informed the drug was administered up until recently,” said an insider close to the investigations.
“Investigators are also probing how traces of the drug lingered in the athlete’s body for more than a month and if other pills or cream, were also used.”
The biological half life of dexamethasone, a lower-strength steroid, is between 36 and 54 hours. It is not a performance-enhancing drug.
Dexamethasone pills and cream are usually prescribed to reduce inflammation and swelling.
Lee was tested during the World Championship semifinal in Copenhagen, Denmark on Aug 30 where sample A of his urine tested positive.
Another source said it was peculiar the drug still existed in Lee’s body for more than a month as recent medical records showed the drug was only administered on July 17 -- as confirmed by Youth and Sports Minister Khairy Jamaluddin yesterday.
“What could have happened is that the team that conducted the surgery assume the drug would be flushed out of the system before Lee competed at the World Championships. Thus, they did not see the need of informing any party. But this should not have happened as the NSI must know every single detail.
“This cannot be swept under the carpet.”
When asked of the level of the reading of the drug in sample B of Lee’s urine which was tested in Oslo, Norway last Wednesday, the source said: “It was high enough”.
“Previously, the threshold of traces of the drug was 30 nanograms but the World Anti-Doping Agency (WADA) changed the regulation 18 months ago. Now even a slight trace of the drug is considered positive. It remains unclear if those within NSI were aware of such changes prior to Lee’s saga,” the source said.
BA of Malaysia (BAM), at its press conference yesterday, said it received a letter from Badminton World Federation (BWF) on Friday confirming traces of the drug were seen in sample B of the urine. BAM said it was “at no liberty to reveal the name of the player” adding “the athlete is serving a temporary suspension”.
“We were also informed by BWF this matter will be referred to the BWF Doping Hearing Panel and now due process will take place. The panel will provide the time, date and location of the hearing,” said BAM deputy president Datuk Norza Zakaria.
Norza said the national body was working with Sports Minister Khairy Jamaluddin and has hired London-based lawyer Mike Morgan to assist them.
Norza declined comment when asked about details of the drug and the tests conducted.
“(NSI chief executive officer) Dr Ramlan would be the best person to answer these questions,” he said.
When asked if there was a conflict of interest as he was both NSI chairman and BAM’s anti-doping working committee chairman, he replied: “No”.
BWF has not responded to an email as to when it will meet to discuss the case.

KUALA LUMPUR — While stressing it was his professional responsibility, Datuk Dr Ramlan Aziz said any attempt to turn him into a scape goat following the doping saga involving a top national athlete was “irresponsible”.
Knives are out for the National Sports Institute (NSI) chief executive officer as certain quarters have taken him to task after Lee Chong Wei’s urine sample saw traces of banned substance. Dr Ramlan is not new to such controversy as there were efforts to remove him in 2012.
“As the athlete’s doctor, it is my professional responsibility ... but any attempt to place blame at my feet would be irresponsible,” said Dr Ramlan.
“Anyone who would want to do something like that would have to produce evidence.”
Dr Ramlan said NSI was still investigating the fiasco involving the top national shuttler.
“I can’t say anything about the investigations for now. But I can say this, there was no sign of the player lying,” he said.

Lee: I hope to clear my name soon

KUALA LUMPUR — Lee Chong Wei breaks his silence as he shares his thoughts with former Mailsport journalist, now sports blogger, Satwant Singh Dhaliwal on the alleged doping scandal that has now plagued him.
Published on ssdhaliwal.blogspot.com, the article comes a night before the BA of Malaysia’s (BAM) press conference yesterday, and is based on a series on conversations between Lee and the writer before and after sample B of his urine was tested.

“My knees wobbled and I could neither stand nor sit down as I read the letter notifying me I had failed a doping test,” said Lee, his voice choking with emotion.
“I saw my life flash by me, the last 15 years just going up in smoke. I was devastated and just did not know what to do.
“I have never cheated not even made any attempt to cheat, so this was like a bolt of lightening, destroying everything I had worked so hard for.
“I am a firm believer of hard work and effort to achieve success so such an allegation left me speechless and dumbfounded.”
Lee said his wife Wong Mew Choo suggested they take a break abroad to clear his mind and also leave it to the authorities to get to the bottom of the matter.
“The Sports Minister took charge personally and for that I am grateful as he guided me and gave me good advice on how to handle matters,” said Lee.
“I was informed the drug was last injected into me on July 17 and how the traces were still there in August is something I cannot explain.
“Suffice to say I never took drugs beyond those prescribed to me and deny suggestions that I resorted to traditional herbs that contained banned substance.
“I went through an out of competition test on Aug 15 and it was all clear. So it is a mystery how this substance was found in my system on Aug 30.”
The national icon said many a time he wanted make a public statement but opted to wait till sample B was tested.
“I hope the public understands my position and situation. I must reiterate everything is being done to clear the air and to get to the root of the problem,” said Chong Wei, 32.
“I went to Oslo to observe the B sample bottle being opened and go through the documentation to satisfy myself.
“I know the possibility of it being different is remote but it is a procedure that needs to be done.
“All my medications, treatment records and supplements are being treated by the authorities who hope to find out how the substance was still in my system more then a month after I last received the injection for treatment of my thigh injury.”
Lee is hoping Badminton World Federation will evaluate all evidence presented.
There has been speculation Lee could either receive a severe reprimand or be suspended for a period of six months.
A six month suspension will mean the shuttler will lose some 43,000 out of his 97,000-odd current ranking points and he will slip to a world ranking of between 15 and 18 by March.
“We will cross the bridge when we come to it I guess,” said Chong Wei.
“At the moment I am confined to my house and have not even thought of returning to the courts yet.
“There are many unanswered questions and I hope to clear my name soon. I never cheated nor will I ever rely on banned substances.”

Sponsors to stand by shuttler, for now

PETALING JAYA — Lee Chong Wei’s sponsors have promised to stand by the shuttler, who is temporarily suspended after testing positive in an anti-dope test.
The athlete’s urine samples contained traces of a type of glucocorticosteroids called dexamethasone, which is prohibited during competition “when administered by oral, intravenous, intramuscular or rectal routes”, according to the World Anti-Doping Agency’s prohibited list.
It is, however, permitted outside competitions to aid rehabilitation as it is not a performance-enhancing drug.
His sample A tested positive on Aug 30 after Lee defeated Denmark’s Viktor Axelsen in the semifinals of the World Championships in Copenhagen. Sample B was tested on Wednesday and it also proved positive for dexamethasone.
“We have had an internal discussion regarding the matter and we will stand by him at the moment,” said an official from one of his sponsors.
“Under terms of our agreement, we are not allowed to comment on any issues but needless to say we are supporting him as this is not a performance enhancing drug. It is also not a recreational drug such as cocaine or heroin.”
Another sponsor said: “We also stand by him. Furthermore, we think we can settle this with the world body with the support from the National Sports Institute and BA of Malaysia (BAM) as there are speculations that he was injected by a doctor.”
This sentiment was echoed by several other sponsors.
It is learnt the BAM also discussed the possibility of sponsors pulling out following the fiasco, admitting it could have “severe repercussion” to BAM and Lee.
badminton Datuk Dr Ramlan Aziz Lee Chong Wei Malaysia National Sports Institute norza zakaria