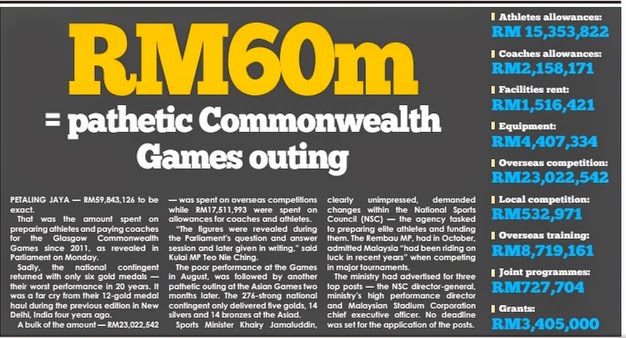 That was the amount spent on preparing athletes and paying coaches for the Glasgow Commonwealth Games since 2011, as revealed in Parliament on Monday.

Sadly, the national contingent returned with only six gold medals - their worst performance in 20 years. It was a far cry from their 12-gold medal haul during the previous edition in New Delhi, India four years ago.

"The figures were revealed during the Parliament's question and answer session and later given in writing," said Kulai MP Teo Nie Ching.

The poor performance at the Games in August, was followed by another pathetic outing at the Asian Games two months later. The 276-strong national contingent only delivered five golds, 14 silvers and 14 bronzes at the Asiad.

Sports Minister Khairy Jamaluddin, clearly unimpressed, demanded changes within the National Sports Council (NSC) - the agency tasked to preparing elite athletes and funding them. The Rembau MP, had in October, admitted Malaysia "had been riding on luck in recent years" when competing in major tournaments.