TMJ – the good, the bad and the ugly

November 19, 2014
As published in Mailsport today 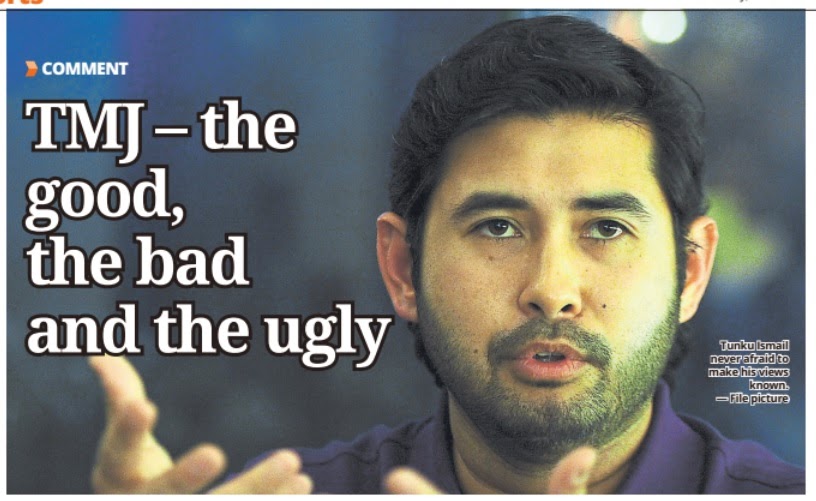 LOVE him or hate him — and there are quite a large number in the latter camp — there is no denying Tunku Ismail Ibrahim always speaks his mind.

There are those who enjoy his views, especially when he blasts FA of Malaysia (FAM), but there are others who feel he has a tendency to go over the top in words and deeds.

More often than not, he escapes sanction because of his position although he did receive a slap on the wrist in March 2013 when he was handed a six-month suspension from all football activities and fined RM18,000 for breaching Article 88 of the Statute 2010-2014 and criticising the quality of referees in the M-League.

The crown prince of Johor who is more popularly known as TMJ, nonetheless, still CONTINUED attending Johor FA functions without a peep from FAM.

For those not in the know, under Article 88 only the FAM president and secretary-general are allowed to talk to the media on policy matters while other individuals must get prior approval from FAM before issuing any statement.

This was amended in August 2013 to give coaches and officials leeway to comment within their jurisdictions and TMJ has certainly used it to his advantage.

His latest outburst on the Johor Southern Tigers Facebook page may sound harsh to some people but mostly made sense.

TMJ questioned why team manager Datuk Sudarsono Osman was not present when Harimau Malaya were training in Johor Baru last week, the inadequate days off for the players who had to report for national camp within days of the Malaysia Cup final, the delay in salaries being paid to Perlis and Selangor players as well as taking on national coach Dollah Salleh once again.

He reasoned that with Malaysia kicking off their campaign in the Asean Football Federation (AFF) Cup on Sunday, all team officials especially Sarawak FA president Sudarsono should have been with the team to lend moral support.

His call for a manager who can commit to the team is correct as many have used the position for political mileage.

He is also correct to say the players needed a longer break before attending the national camp but here the FAM needs to cop the blame as it kept fiddling with its domestic calendar.

If proper planning and thought had gone into the calendar — not to mention leaving the national coach’s position vacant for seven months — this could have been avoided.

Dollah only took over as coach on July 1 while Datuk K. Rajagobal’s contract ended on Dec 31, 2013.

TMJ, who is the patron of Professional Footballers Association Malaysia, also took to task associations which fail to pay their players’ salary on time as they did not plan their finances properly.

Since taking over as JFA president in 2012, TMJ has recruited some of the best players in the country and even had Argentine hotshot Pablo Aimar on Johor Darul Takzim’s (JDT) payroll.

The players earn a lucrative living with their salaries and bonuses paid on time — although here too TMJ has his fair share of critics who insist he is paying the players more than they are really worth.

This is not the first time TMJ has criticised Dollah for his choice of players and assistants, but here the Johor prince must realise it is the coach’s prerogative to select who he believes will fit into his system.

Norfarhan himself admitted he has failed to deliver when playing for the national team while Razman used to be under Dollah’s tutelage when he was the Pahang coach. Perhaps the former international knows something we all don’t.

At the end of the day, Dollah will have to live or fall by his selection.

Tunku Ismail, who saw JDT fail to become only the second club side to win the Malaysia Cup earlier this month — MPPJ are the only club to win the title when Dollah was coach in 2003 — also criticised the huge amount spent on laying a new pitch at the National Stadium in Bukit Jalil.

Just to be clear, despite attempts to rewrite history, Super League outfit JDT are a club side, who started life as PKENJ FC in 1972 before changing their name to Johor FC in 1996 and finally JDT in 2012. JDT II ARE the state side but play in the Premier League.

The Sports Ministry via the Malaysia Stadium Corporation (MSC) spent RM1.5 million on the National Stadium pitch but 20 minutes into the Malaysia Cup final, the pitch ripped open.

JFA only forked out RM150,000 for the pitch in Larkin Stadium which is now considered among the best in this region.

Good, bad and the ugly truth. TMJ is unlikely to keep quiet — especially as he is seen as a future FAM president.