BEING FRANK: What if he were your son? 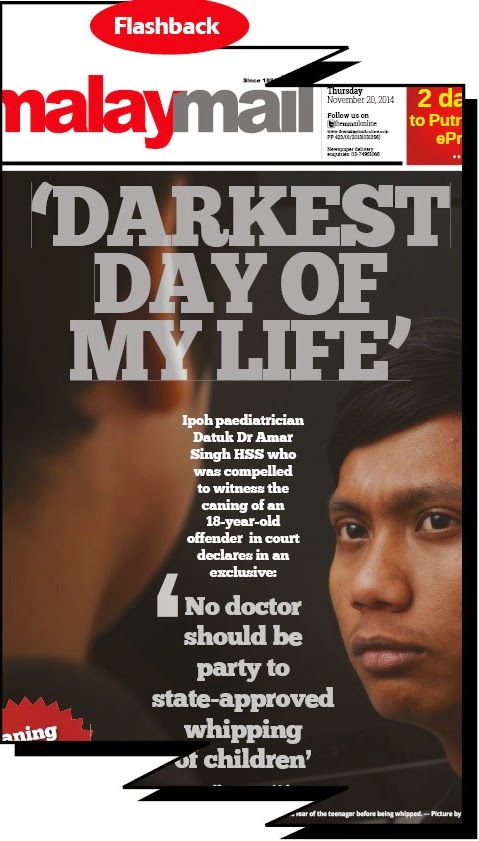 WHEN young offenders are caned in court in front of the public gallery, including newsmen, the people’s capacity for outrage better be inexhaustible.

The nastiness of courtroom whipping reflects one of several indecorous challenges to the legal system that have brought dismay about questionable sentencing.

While disciplinary action deserves praise, caning young men in court is a cosmetic step towards rehabilitation — one that would probably harden a publicly-shamed teenager.

Law aside, we are not meant to hurt our children in this manner. The courts did.

This week, two young men aged 19 and 20 received seven and eight strokes of the rotan respectively for gang robbery at a Sessions Court in Kuala Lumpur.

Last week, an 18-year-old was whipped six times at a magistrate’s court in Ipoh for a break-in offence.

The bench appears to have pushed rather hastily into the book, showing no sign of being in the eyeline of other options available to reprimand the young men.

The head of the Paediatric Department, Hospital RPB Ipoh, Datuk Dr Amar Singh HSS, who was compelled to witness the caning of the break-in offender voiced his grievances to Malay Mail: “Section 91 of the Child Act offers other choices.

“Probation is one such choice that could have been made in the form of diversion (rehabilitation through counselling).”

Saying he experienced “one of the darkest days of my life as a paediatrician”, Dr Amar arranged with the mother for the young man to meet him for long-term support: counselling, getting a job and training.

Dr Amar could have been in contempt of court had he not turned up that day.

Under the Child Act (Article 91) a male child can be whipped up to 10 times. He was horrified. So were his colleagues.

He went so that none of his younger doctors would have to experience this cruel act. He went also with the hope that he could prevent it from happening.

Dr Amar told Malay Mail: “I made an appeal in chambers to offer ‘diversion’ as an alternative i.e. we are prepared to work with this young man long-term to help rehabilitate him.

“However, since the sentencing had been handed down, the magistrate could not alter the decision and the only option was to appeal to the High Court.

“This was difficult for the parents to do and the mother decided not to.”
“The young man was caught at the age of 16 for break-in.

“In my assessment of him, he is not a hardened criminal but had fallen in with bad friends.
“It looked possible to help him get on the right path.

“He was placed under a bond by the court, which he unfortunately broke.

“The family was then offered a placement in Henry Gurney School or to be whipped with a light cane.

“So as not to lose him from home, they chose the whipping.

“If anyone says that this is a ‘light cane’ they need to experience the punishment.

“When the first stroke rang out I cringed as I saw how badly hurt he was.

“After three strokes the young man almost fell down due to severity of the pain.

“He managed to hold on to receive all six strokes.”

Dr Amar believes the magistrate had been poorly advised by those present in court, the Welfare Department and the family’s lawyer, as to other options available.

Clearly, the courts in all the cases were carefree.

No wonder, the three whippings stirred a vehement debate among psychologists, lawyers and law enforcement officers, who interpreted the decisions of the bench differently.

Actually, I wish the debate gets thoughtful with a profound understanding of the issue.
But don’t let out your last, weary sigh just yet.

It’s safe to say the Sessions Court judge and the magistrate were adapting to the book just fine, except they possibly failed to understand that young men are vulnerable to all things bad.

Surely anyone paying attention to the culture of youth would be aware that the days are long gone when elders could push over the young just by breathing on them.

By whipping teenagers, aren’t we being deeply disturbing — and in a certain way twisted? Somebody ought to feel guilty.

It is imperative that we feel, hear and understand things about the young in ways that very few are brave enough, uncompromising enough, or brilliant enough to manage.

Dr Amar has set the tone. As he says, society must learn that hitting a child or teenager is not a useful form of instruction.

“We must lobby to change these provisions in the Child Act; it is currently up for revision.
“Legally sanctioned hitting of children must stop.

“And no doctor should be party to or be required to support any physical punishment of children, even if they are criminals.”

The future of the wayward young must not be trampled upon by quavering inertia.