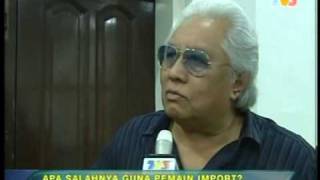 PETALING JAYA - The FA of Malaysia (FAM) are keeping mum over talks that the national body is contemplating paying between RM400,000 and RM1.2 million to a third party to evaluate three potential sponsorship deals for the coming season.

"I do not have the mandate to comment on this. It is best if these questions were directed to the president (Tengku Abdullah Shah)," he said.

"We are still in the midst of evaluating the three deals. There is a need to be meticulous as it must be in the best interest of Malaysian football."

Malay Mail, in its column Haresh Says yesterday, revealed there were efforts of getting a third party to make the decision on behalf of FAM.

The article quoted an insider saying: "You are right (about FAM wanting to hire a third party). We're looking at RM1.2 million but nothing has been decided yet."

Tengku Abdullah, had previously, indicated the national body will name the sponsor "by the end of September" but nearly two months have passed and a deal is far from being inked.

Zenith and the Media Prima-Telekom Malaysia bids were the front runners as Astro initially refused to increase their bid though it is believed they have softened their stance in recent weeks.

Even the privatisation of the league, which was supposed to be done next year, has been postponed indefinitely as it also revolves around the sponsorship deal.

It is learnt the privatisation plans would be staggered over the next five years.
FAM football Hamidin Amin Mailsport sponsorship Vijhay Vick