Is this the end of Lee Chong Wei 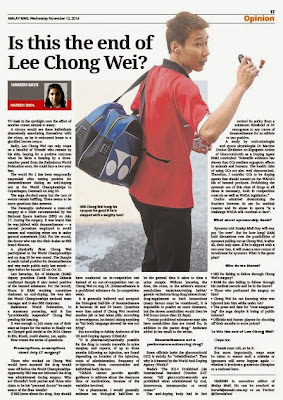 TO bask in the spotlight over the effort of another comes natural to many.

A victory would see these individuals shamelessly associating themselves with the victor, as he is welcomed home to a glorified heroes return.

Sadly, Lee Chong Wei can only count on a handful of ‘friends’ who remain by his side, hoping for a positive outcome when he faces a hearing by a three-member panel from the Badminton World Federation soon. He could face a two-year ban.

The world No 1 has been temporarily suspended after testing positive for dexamethasone during an anti-doping test at the World Championships in Copenhagen, Denmark on Aug 30.

The saga shocked many but the turn of events remain baffling. There seems to be more questions than answers.

The Penangite underwent a stem-cell surgery at a clinic recommended by the National Sports Institute (NSI) on July 17. During the surgery, it was learnt that he was jabbed with dexamethasone — a normal procedure employed to avoid nausea and vomiting when one is under general anaesthesia (GA). For the record, the doctor who ran the clinic is also an NSI board director.

A physically fitter Chong Wei participated in the World Championships and on Aug 30 he was tested. The Sample A result tested positive for dexamethasone and was made public early last month — days before he turned 32 on Oct 21.

It was enough to jolt many out of their seats as hopes for the nation to finally net an Olympic gold medal at the 2016 Games in Rio, Brazil, could shatter, yet, again.

Now comes the series of questions.

Those who worked on Chong Wei would have assumed the drug would wear off before the World Championships. Apparently NSI was not informed the drug was administered during surgery. Why so? Shouldn’t both parties and those who claim to be his “personal doctor” be made aware of the finer details?

It is generally believed and accepted the biological half-life of dexamethasone is between 36 and 54 hours. Questions were then raised if Chong Wei received another jab or had taken pills. According to investigators, he denied taking anything as “his body language showed he was not lying”.

But according to Ashley Anderson of the US Anti-Doping Agency (USADA):
“It is pharmacodynamically possible for the drug to remain traceable in urine samples, and reports, of up to three months following an injection, are found depending on location of the injection, route of administration, frequency of re-injections, dose, concentration and individual body factors.

“USADA cannot provide specific guidance to athletes about the clearance time of medications, because of the variables involved.

“As a pharmacist, I would generally estimate ten biological half-lives to be the general time it takes to clear a urine sample. Without knowing the dose, the route, or the athlete’s stature/metabolism variations/eating habits/genetic variations/drug-drug interactions/drug-supplement or herb interactions (many factors must be considered), it is impossible to predict an exact clearance, but the slower metaboliser would then be 540 hours (more than 22 days).

“Certain prohibited substances may also have metabolites that are tested for, in addition to the parent drug,” Anderson added in her email to the writer.

Dexamethasone not a performance-enhancing drug?

Some officials insist the glucocorticoid (GC) is strictly for “rehabilitation”. Then why is it banned by the World Anti-Doping Agency (Wada)?

The anti-doping body had in fact revised its policy from a minimum threshold of 30 nanograms to any traces of dexamethasone for an athlete to test positive.

A study by endocrinologist and sports physiologist Dr Martine Duclos (Evidence on Ergogenic Action of Glucocorticoids as a Doping Agent Risk) concluded: “Scientific evidence has shown that GCs mediate ergogenic effects in animals and humans. The health risks of using GCs are also well characterised. Therefore, I consider GCs to be doping agents that should remain on the WADA’s list of banned products. Prohibiting the systemic use of this class of drugs at all times is necessary, both in competition controls as well as WADA legislation.”

Duclos admitted determining the frontiers between its use for medical reasons and its abuse in sports “is a challenge WADA will continue to face”.

What about sponsorship deals?

Sponsors told Sunday Mail they will stay put “for now”. But for how long? BAM held discussions over the possibilities of sponsors pulling out as Chong Wei, is after all, their only asset. If he is slapped with a two-year ban, it will mean a zero return of investment for sponsors. What is the game plan?

• NSI for failing to follow through Chong Wei’s surgery?
• BAM for also failing to follow through his medical records and be in the know?
• Those who performed the surgery on him?
• Chong Wei for not knowing what was injected into him while under GA?
• The press and fans for “over-exaggerating” the saga despite it being of public interest?
• Officials and former players for shooting off their mouths to score points?

Is this the end of Lee Chong Wei?

If heads must roll, so be it.
But more importantly, steps must be taken to ensure such a mistake or ignorance will never happen again — whether it involves a grassroots champion or a national hero.