Count on doubles for Rio gold 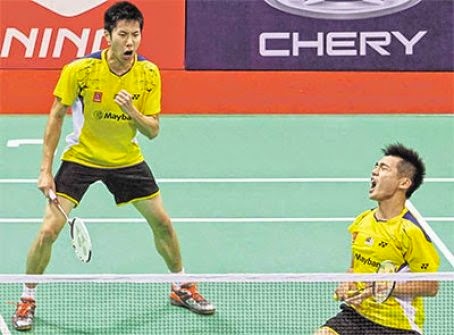 BUKIT KIARA - With the country’s main hope of an Olympic gold medal now shrouded in a doping controversy, doubles coach Pang Cheh Chang wants his charges to step-up for the big prize at the Rio de Janeiro Olympic Games in 2016.

“Ideally I want both our pairs ranked in the top eight when the qualifying period ends (May 2016) so that we stand a better chance of vying for gold,” he said when met at the national team’s training session at Stadium Juara yesterday.

When asked which pair he thinks stands a better chance of gold, Cheh Chang slanted towards the younger duo of Tan Wee Kiong-Goh V Shem (pic).

“Wee Kiong and V Shem probably have an advantage because of their age. But do not discard Hoon (Thien How) and Tan (Boon Heong).

“If they can draw inspiration from veteran pairs such as Cai Yun-Fu Haifeng and Mathias Boe-Carsten Mogensen, nothing is impossible. I had told them previously with a concentrated effort, they can achieve the unthinkable.”

Cheh Chang has rejuvenated hopes in the doubles after the foursome’s commendable exploits this year, which saw them play a significant role in winning the Commonwealth Games mixed team gold and finishing runners-up in the Thomas Cup.

“Our doubles were in a desperate state before the Thomas Cup. But we showed we can compete with other nations at the highest level during the Commonwealth and Asian Games. They can go far with consistent training and a winning mentality,” Cheh Chang enthused.

Wee Kiong meanwhile is ready to link-up with any shuttler ahead of the upcoming Axiata Cup (Nov 27-Dec 7) after losing his regular partner V Shem through injury.

“I do not mind partnering anyone, be it Thien How or Boon Heong. I have skipped many tournaments this year, plus now my partner is also injured so I am determined to end the season on a high.”

Wee Kiong also lamented the absence of Lee Chong Wei, which he said was a blow to the team.

“Chong Wei is very important to the team. I am hoping we can compensate for his absence by making it at least to the semifinals.”
badminton olympics pang cheh chang rio Tan Wee Kiong-Goh V Shem