Selection headache for Dollah after another defeat; Do not give up hope, urges Aidil 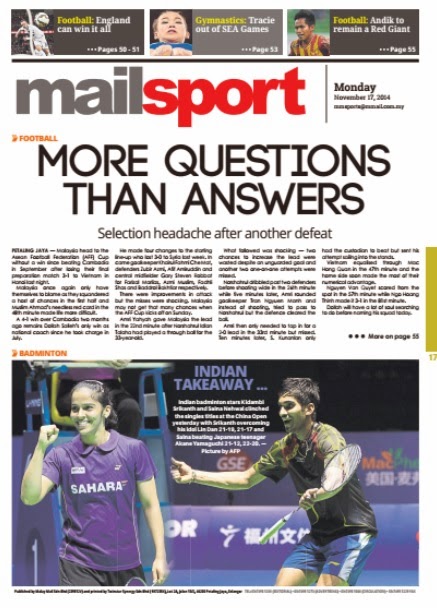 PETALING JAYA — Malaysia head to the Asean Football Federation (AFF) Cup without a win since beating Cambodia in September after losing their final preparation match 3-1 to Vietnam in Hanoi last night.

Malaysia once again only have themselves to blame as they squandered a host of chances in the first half and Muslim Ahmad’s needless red card in the 48th minute made life more difficult.

A 4-1 win over Cambodia two months ago remains Dollah Salleh’s only win as national coach since he took charge in July.

He made four changes to the starting line-up who lost 3-0 to Syria last week.

There were improvements in attack but the misses were shocking. Malaysia may not get that many chances when the AFF Cup kicks off on Sunday.

Amri Yahyah gave Malaysia the lead in the 22nd minute after Norshahrul Idlan Talaha had played a through ball for the 33-year-old.

What followed was shocking — two chances to increase the lead were wasted despite an unguarded goal and another two one-on-one attempts were missed.

Norshahrul dribbled past two defenders before shooting wide in the 26th minute while five minutes later, Amri rounded goalkeeper Tran Ngyuen Manh and instead of shooting, tried to pass to Norshahrul but the defence cleared the ball.

Amri then only needed to tap in for a 2-0 lead in the 33rd minute but missed. Ten minutes later, S. Kunanlan only  had the custodian to beat but sent his attempt sailing into the stands.

Vietnam equalised through Mac Hong Quan in the 47th minute and the home side soon made the most of their numerical advantage.

Nguyen Van Quyet scored from the spot in the 57th minute while Ngo Hoang Thinh made it 3-1 in the 81st minute.

Dollah will have a lot of soul searching to do before naming his squad today.

The national team look far from a finished product and many are already speculating a group stage exit from the regional competition which begins on Sunday.

“Stand being us even though our recent performance have not lived up to expectations,” said Aidil.
“We players are pushing ourselves hard to improve and need all the support we can get.

“We have to raise our game ... there is no doubt about that. We’ll start the AFF Cup with a fresh mind.”

Aidil competed in the last two editions with Malaysia winning the cup in 2010 and finishing as losing finalists in 2012.

Though a centreback, Aidil could be played at rightback as Mahali Jasuli’s defending capabilities are not up to par.

Aidil played on the right for Johor Darul Takzim in the Malaysia Cup.

Aidil did not travel to Hanoi for yesterday’s friendly against Vietnam as he is nursing a knock.
He could even skipper the team if Dollah Salleh decides against changing his captain. Aidil was named captain in July but Dollah hinted veteran midfielder Shukor Adnan could be given the armband for the AFF Cup.