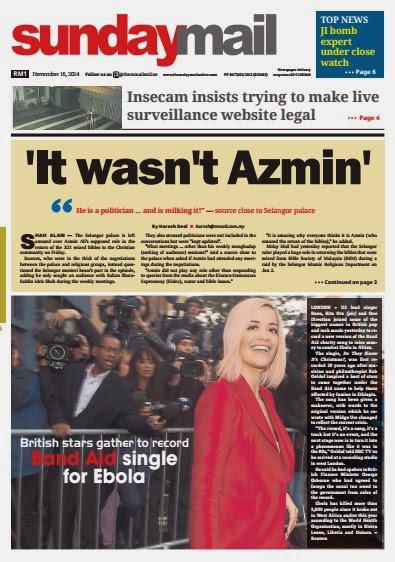 As published in Sunday Mail today.

SHAH ALAM — The Selangor palace is left amused over Azmin Ali's supposed role in the return of the 321 seized bibles to the Christian community on Friday.
Sources, who were in the thick of the negotiations between the palace and religious groups, instead questioned the Selangor menteri besar's part in the episode, adding he only sought an audience with Sultan Sharafuddin Idris Shah during the weekly meetings.
They also stressed politicians were not included in the conversations but were "kept updated".
"What meetings ... other than his weekly menghadap (seeking of audience) sessions?" said a source close to the palace when asked if Azmin had attended any meetings during the negotiations.
"Azmin did not play any role other than responding to queries from the media about the Kinrara-Damansara Expressway (Kidex), water and bible issues."
"It is amazing why everyone thinks it is Azmin (who ensured the return of the bibles)," he added.
Malay Mail had yesterday reported that the Selangor ruler played a huge role in returning the bibles that were seized from Bible Society of Malaysia (BSM) during a raid by the Selangor Islamic Religious Department on Jan 2.
Insiders claimed the matter would have been settled earlier if not for the Selangor Menteri Besar crisis.
Selangor Religious Council chairman Datuk Mohamad Adzib Mohd Isa handed over the bibles to Association of Churches in Sarawak (ACS) during a simple ceremony at Istana Alam Shah on Friday. Also present during the ceremony were the Selangor ruler and Azmin.
Politicians from both divides had since praised Azmin over the positive outcome, unaware that negotiations between the concerned parties had started even during Tan Sri Khalid Ibrahim’s tenure as Menteri Besar.
Azmin replaced Khalid two months ago.
“Khalid had in fact proposed a settlement to the saga and conveyed it to Tuanku (Sultan Sharafuddin). He (Khalid) said it was up to Tuanku’s discretion,” revealed another insider.
“That was the input we obtained from the state government ... which was from Khalid.”
Khalid, when asked by reporters over the turn of events during a function at Bandar Tun Razak yesterday, downplayed his role by saying “as long as it is for the good of the people, I am fine by it.”
The insider explained: “Tuanku made it clear he did not want any politicians to be involved as once a politician is involved, we will only see continued bickering between the politicians from both divides and it will never end.
“So to settle this politicians were not involved but were kept updated.”
“He (Azmin) is a politician ... and he is milking it!” he added.
azmin ali bible jais mais Menteri Besar Selangor selangor palace sultan sharafuddin idris shah