FORMULA E: Getting ready for a different formula 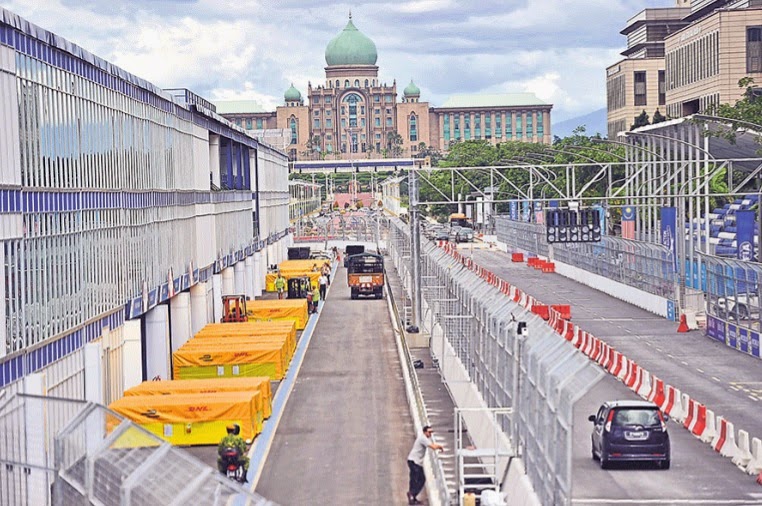 SO, that had to be the best traffic jam one could ever get caught in.

On the very same road that 20 electric cars will be on when the lights go out for the Putrajaya Formule E race.

Getting onto the track in Precinct 2 after driving on the bridge located in the area, there was a slight thrill as the metal safety barriers on either side of the street circuit loomed ahead and way down the straight.

Tonnes of vehicles have passed along this way and as the days speed up to race day on Saturday, the vision that started some two years ago is becoming a reality as seen by the grandstands and pit area that have been put up.

Along the way, there are giant screens to show the race and I grinned to myself as the traffic halted to a stop as we approached the start/finish line. The unmoving traffic has never delighted me quite as much as those moments as it gave me the chance to take in the view outside.

I mean, how cool can it get?

Granted the yearly “pilgrimage” to cover Formula One at the Sepang International Circuit causes me to grin like a fool every time I drive into the parking lot, the regular Malaysian getting the opportunity to drive on a racing track is quite remote.

And there I was, in my environmental-unfriendly Perodua Myvi doing just that.

Malaysia will become only the second country to host a Formula E race that debuts this year.

This comes after Beijing and the list of drivers are impressive enough with winemaker/former Formula One driver Jarno Trulli, who also owns a team, in the mix.

The Putrajaya circuit is untested by drivers in their electric cars as yet and so far, they have only had a taste of the track by way of simulator as can be seen by India’s Formula One driver Karun Chandhok on YouTube.

In fact, the flurry of activities is still ongoing in and around the track to get everything just right for Saturday’s race.

This includes teams moving in to their respective garages with cars still neatly packed in their containers yesterday morning while workers go about their work.

The surrounding areas are definitely not barren with famous Putrajaya landmarks such as the Finance Ministry and Palace of Justice located along the circuit.

From the distance, there is the iconic building of the Prime Minister’s office.

Formula E Malaysia chairman Datuk Seri Johann Young has already given his assurance that getting in and out of the circuit will not be a problem as there was more than enough exit/entry points.

“We also have hundreds of toilets,” he says adding that Putrajaya was no stranger to hosting large-scale events including the One Million Youth gathering.

In terms of entertainment, Young says there would be cultural events, including local food (this was for foreign tourists, he explains) and car exhibitions featuring the latest electric cars that were available for test drives.

The pit building is portable, made from durable material and can be reused for future races.
Formula E seeks to bring difference to the world of motorsports that is geared for the future with its bevy of electric cars.

Motorsports, after all, has always been the base for road cars where the technology that is developed can make it into your vehicle.

This latest racing series seeks to use the sport to promote the electric car industry and to use the series as a framework for research and development, says the FIA Formula E championship website.
“It’s hoped Formula E will increase use of electric cars, especially in urban areas, and to improve our environment and way of life. Formula E represents a vision for the future of the motor industry over the coming decades, serving as a framework for research and development around the electric vehicle, accelerating general interest in these cars and promoting sustainability.”

For Malaysia, it also sees a shift from the Formula One purpose-built race track in Sepang to an entirely new circuit.

An alternative venue that, hopefully, in the years to come see it grow from strength to strength.
Granted it has been quite a dismal year so far for Malaysians, this race could be a spark of happiness.
We are among the first handful of countries in the world to have electric cars battling it out on the streets. That is something to be proud of.

And who knows in the future, instead of there being petrol heads, the racing fans will be called battery heads.