Massive onslaught to save Camerons 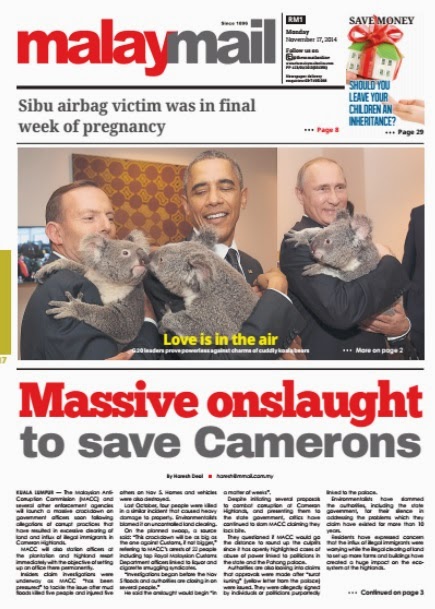 KUALA LUMPUR — The Malaysian Anti-Corruption Commission (MACC) and several other enforcement agencies will launch a massive crackdown on government offices soon following allegations of corrupt practices that have resulted in excessive clearing of land and influx of illegal immigrants in Cameron Highlands.

MACC will also station officers at the plantation and highland resort immediately with the objective of setting up an office there permanently.

Insiders claim investigations were underway as MACC “has been pressured” to tackle the issue after mud floods killed five people and injured five others on Nov 5. Homes and vehicles were also destroyed.

Last October, four people were killed in a similar incident that caused heavy damage to property. Environmentalists blamed it on uncontrolled land clearing.

On the planned swoop, a source said: “This crackdown will be as big as the one against Customs, if not bigger,” referring to MACC’s arrests of 22 people including top Royal Malaysian Customs Department officers linked to liquor and cigarette smuggling syndicates.

“Investigations began before the Nov 5 floods and authorities are closing in on  several individuals.”
He said the onslaught would begin “in a matter of weeks”.

Despite initiating several proposals to combat corruption at Cameron Highlands, and presenting them to the state government, critics have continued to slam MACC claiming they lack bite.

They questioned if MACC would go the distance to round up the culprits since it has openly highlighted cases of abuse of power linked to politicians in the state and the Pahang palace.

Authorities are also looking into claims that approvals were made after “surat kuning” (yellow letter from the palace) were issued. They were allegedly signed by individuals or politicians purportedly linked to the palace.

Environmentalists have slammed the authorities, including the state government, for their silence in addressing the problems which they claim have existed for more than 10 years.

Residents have expressed concern that the influx of illegal immigrants were worrying while the illegal clearing of land to set up more farms and buildings have created a huge impact on the eco-system at the highlands.

“It is not going to be easy. We’re looking at deals made over the past five to 10 years. It will be an uphill task but the authorities are bent on catching the culprits.”

MACC deputy Commissioner (operations) Datuk Seri Mohd Shukri Abdull, had in a statement yesterday, said there was no specific and systematic centre for the public to lodge a complaint regarding illegal land clearing and corrupt practices in Cameron Highlands.

“This is based on our checks there since May last year.

“As such, MACC has decided to place officers there to heighten surveillance and to ensure corrupt practices in Cameron Highlands can be curbed holistically,” he said.

“While awaiting green light from state government to permanently station our men there, our officers will be temporarily based there soonest.”

He said MACC will continue working with other agencies to combat graft there.

In September, MACC with the help of several other enforcement bodies, arrested scores of people after carrying out surveillance at the Port Klang Duty Free Zone (PKFZ) for more than a year.