Greed in full bloom, no space for God’s mercy 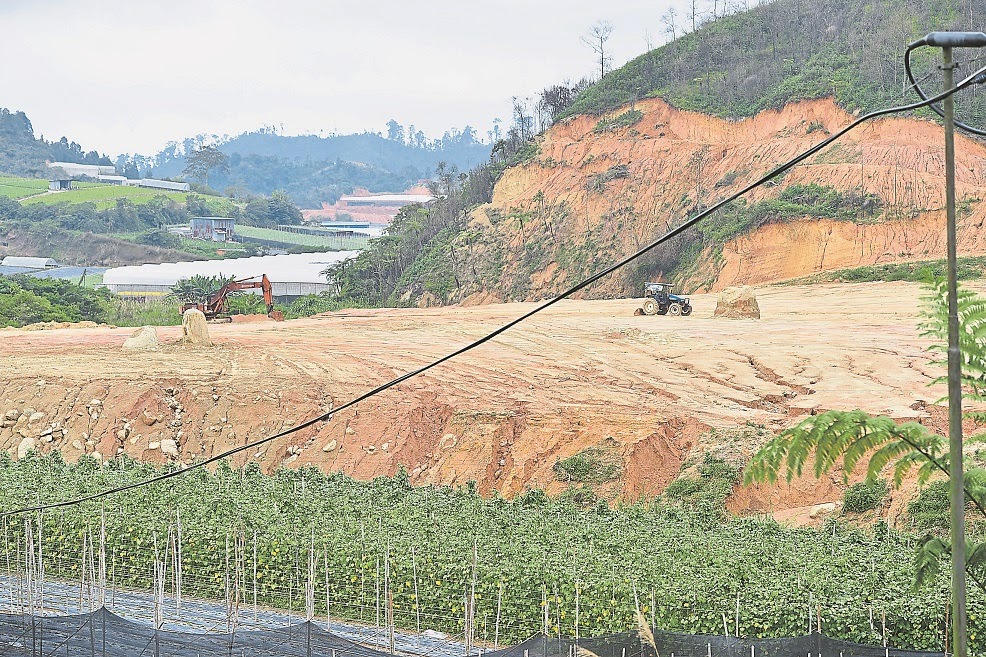 THE situation in Cameron Highlands is overwhelmingly negative. Its portrayal in tour brochures as "wonderful Malaysia" invites spear-throwing and demands action under the Trades Description Act.
It is nothing less than astounding to only now realise that there existed a conspiracy in the concealment of corruption that has battered a major tourist retreat.

The administration of Cameron Highlands evokes Trotsky's line about the "useful idiot" who thinks he wields influence but is being manipulated by those above him.

There must be a price for the corruption and smooth talk in relation to widespread land clearing that has emerged in the wake of the killer floods which have claimed nine lives since October last year.

To ignore the handiwork of the "powerful" who control illegal logging and the highly-lucrative farming for export is treachery. To deem the cause of deaths as an act of God is overlooking manslaughter. To accuse journalistic scrutiny as unpatriotic is not only reprehensible but naïve.

Money, unfortunately, is the language and denominator. Greed has become an unfortunate way of life as Cameron Highlands continues to be ravaged with impunity under the protection of the authorities.

Let’s face it: Cameron Highlands is no longer a paradise. The supreme salesmanship of the tourist spot would be hard to deliver until the influence and insistence of those in "control" — whose motivation is perhaps less about the hill station and more about what is best for them — are laid bare.
The only way to get them out of the way is to set up an independent root and branch inquiry into all aspects of how Cameron Highlands was wrecked.

The naked frustration of the people is for all to see; they must know who and how the tap of chaos was turned on.

Anti-corruption activist Tunku Abdul Aziz Tunku Ibrahim puts it in a nutshell: “I do not normally give myself over to histrionics but what is happening in Cameron Highlands is nothing short of what is referred to in anti-corruption circles as ‘state capture’.”

(State capture is a type of political corruption in which private interests significantly influence a state’s decision-making processes to their own advantage through illicit and unobvious channels).
Now consider: Close to 80 per cent of Cameron Highlands' produce, mainly vegetables and fruits, are exported to Singapore, Hong Kong and Brunei — an extremely lucrative business that strangulates sound coming from the throats of those who oppose the rape of the pride of the nation.

Then consider:  Pahang Menteri Besar Datuk Seri Adnan Yaakob had two years  ago asked the Malaysian Anti-Corruption Commission (MACC) to carry out an investigation into widespread illegal logging in Cameron Highlands, saying if not curbed, the forest could disappear due to irresponsible acts allegedly involving abuse of power.

Why didn’t MACC do it? If they did, why weren’t the findings made public?

So, hardly anyone took the MACC seriously when it offered 12 proposals to counter illegal activities in the wake of the latest mud floods.

The Immigration Department and the police are no better for intelligence failure involving the presence of large numbers of illegal workers. They appear to be on perpetual vacation.

You’d think they were doing us a favour by hunting illegal foreign workers now when it was them who allowed the situation to spin out of control.

Can you blame anyone for suggesting the authorities were receiving kickbacks? I am being polite when I say that the government has often struggled to articulate a principled and coherent response to the problems in Cameron Highlands.

Should you ever go sailing on tricky seas, Pahang state secretary Datuk Seri Muhammad Safian Ismail might not be the most recommended of crewmates.

He told an English daily that when the state government failed to take action  against those involved in the illegal activities, aggressive illegal land clearing continued unabated by irresponsible parties who wanted to make big profits.

Datuk Seri, why wasn’t any action taken when it was alleged by several quarters that government officers from top down were involved in corrupt practices, including illegal logging? Were you shut down by people in power?

You have to go Mr Secretary because you are weak. Your rhetoric and knee-jerk reaction blinds honesty. Might I suggest you keep a tank of piranhas by your side and dip your hand into the water to bring you to your senses.

Similarly, there should be a clear-out of everyone in authority at the highland’s district and land office.

In Kota Kinabalu this week, he said: “We need to preserve forest areas as most of the forests in the two states (Sabah and Sarawak) as well as the peninsula are already gone."

Thank you for the breaking news Palanivel. So, when was the last time you looked into the plight of your constituents or the mounting allegations of corruption?

So, gather Palanivel and the other so-called guardians of Cameron Highlands.
You are in line to produce a screwball tourism documentary that portrays Malaysia’s pride in complete shambles.

You will have it easy playing the roles: Be selfish, non-committal, shoddy, disorganised, unfocused but more importantly, stand by the influential lot who treat you like a rag doll.

Never mind the distress flares that have been sent up, just plot the quickest way to lifeboats.

Award­-winning journalist Frankie D’Cruz is Editor Emeritus of Malay Mail. He can be reached at Frankie@mmail.com.my and Twitter @frankieDcruz.