November 18, 2014
As published in Mailsport today 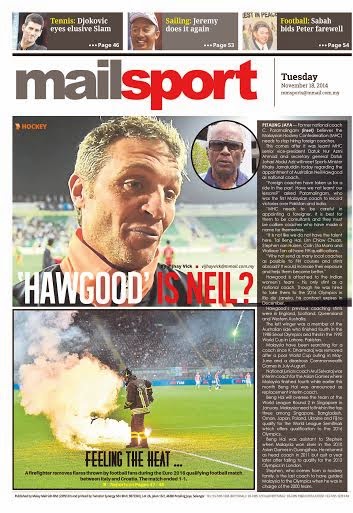 “Foreign coaches have taken us for a ride in the past. Have we not learnt our lessons?” asked Paramalingam, who was the first Malaysian coach to record victories over Pakistan and India.
“MHC needs to be careful in appointing a foreigner. It is best for them to be consultants and they must be calibre coaches who have made a name for themselves.

“It is not like we do not have the talent here. Tai Beng Hai, Lim Chiow Chuan, Stephen van Huizen, Colin Sta Maria and Wallace Tan all have FIH qualifications.

“Why not send as many local coaches as possible to FIH courses and stints abroad? It would increase their exposure and help them become better.”

Hawgood is attached to the Indian women’s team — his only stint as a national coach.

Though he was hired to take them to the 2016 Olympics in Rio de Janeiro, his contract expires in December.

Hawgood’s previous coaching stints were in England, Scotland, Queensland and Western Australia.
The left winger was a member of the Australian side who finished fourth in the 1988 Seoul Olympics and third in the 1990 World Cup in Lahore, Pakistan.

Malaysia have been searching for a coach since K. Dharmaraj was removed after a poor World Cup outing in May-June and a disastrous Commonwealth Games in July-August.

Beng Hai will oversee the team at the World League Round 2 in Singapore in January.

Malaysia need to finish in the top three among Singapore, Bangladesh, Oman, Japan, Poland, Ukraine and Fiji to qualify for the World League Semifinals which offers qualification to the 2016 Olympics.
Beng Hai was assistant to Stephen when Malaysia won silver in the 2010 Asian Games in Guangzhou.

He returned as head coach in 2011 but quit a year later after failing to qualify for the 2012 Olympics in London.

Stephen, who comes from a hockey family, is the last coach to have guided Malaysia to the Olympics when he was in charge of the 2000 team.
Australia c.paramalingam hockey johari abdul aziz Malaysia Malaysian Hockey Confederation neil hawgood nur azmi ahmad