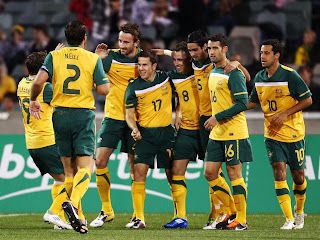 The match was during the announcement of the 2012 Budget by Prime Minister Najib Tun Razak - which sees the allocation of RM15mil to build an additional 150 futsal courts and RM50mil to build football fields with artificial turfs, equipped with floodlights at 30 selected locations nationwide.

Joesph Kalang Tie failed to live up to expectations in the engine room while the back four were disappointing - yet again - leaving goalkeeper Khairul Fahmi Che Mat to do most of the work.

We could have played way better. The chilly weather of about 13 degree Celsius didn't help either.

Kudos to the 300-odd Malaysian supporters - largely comprising of students armed with banners and drums - who turned up to cheer on the national team.

My good taxi man Jamil Maina, elder brother to the former Penang players Rahman and Johari, told me to take it easy on the youngsters as they need to play more matches.
I wished I could.

HD says: Wished I was watching the match at the stadium instead.
Australia football Malaysia