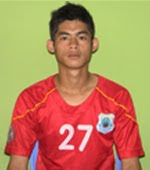 The Young Lions will feature in the M-League next year.

Now another foreign team could be part of the action as Cambodia club Preah Khan Reach FC have stated their interest to play in Malaysia.

An announcement will only be made after officials from the FA of Malaysia and the Cambodian club during the AFF Council meeting in Laos on Saturday.

PKR FC (no affiliation to Parti Keadilan Rakyat) were placed third in the league as hitman Phany Irath (pic) scored 10 goals throughout the season.

HD says: One thing for sure there will be plenty of Cambodians at the stands - reminding one of the days when Indonesians Bambang Pamungkas and Elie Aiboy played for Selangor.
1Care for Malaysians Cambodia football Preach Khan Reach FC