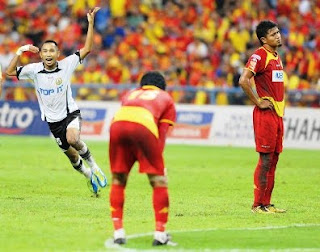 Some say Selangor were on the take right after the Red Giants lost 2-0 in the Malaysia Cup first leg semi final last night.

My take, Selangor are no longer the Giants but they have the services of Lady Luck thus far.

That aside, state FAs are eager to know why aren't they getting more funds from the FA of Malaysia despite the national body having secured a good sponsorship deal early this year.

But why should FAM give states more money? Shouldn't states scout for their own money? Wouldn't the surplus be better spent on the youths?

Splurge on the youths is the headline for From the Sidelines today.

Pic courtesy of The Malay Mail.