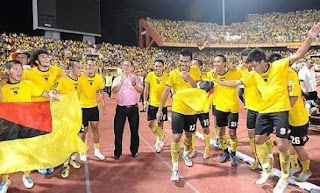 Negeri Sembilan won the Malaysia Cup 2011 final after edging Terengganu 2-1 in the final at the Shah Alam Stadium last night.

Here are the highlights.

Abdul Manaf Mamat (Tganu): Despite being closely monitored by the Negeri Sembilan defenders, Abdul Manaf managed to show his brilliance not once but twice in both halves. He managed to dribble past three players before trying a shot a goal only for the top post to come. In the second half, Manaf dribbled against several players before passing to Ashaari Samsudin who then scored the goal.

S.Kunalan (Negeri Sembilan): He was nippy as always but his passes and shots at goal were disappointing. Yet Kunalan had plenty of reason to celebrate when Teregganu goalkeeper Sharbinee Allawee fumbled to catch an easy free kick shot by Kunalan. It was a perfect Deepavali gift for Kunalan.

Hairuddin Omar (Negeri Sembilan): The seasoned hitman has appeared in three Malaysia Cup finals and scores in all three. Scoring against the Turtles was not easy for the Terengganu born Hairuddin as he appologised to the east coast fans hoping they will not hate him for scoring the winner.

Azraai Khor Abdullah (Negeri Sembilan coach): Was a cool figure before and after winning the Malaysia Cup. The win was a perfect belated birthday gift after Azraai turned 59 on Oct 25. His pink shirt continues to bring him luck.

Shah Alam Stadium: Most agreed the pitch was bad. Period.

Fans: Despite the drama and the threats not to come to the stadium, the final saw a healthy crowd. Then again, most of the fans bought the tickets for either RM30 (N.Sembilan) or RM25 (Terengganu) thanks to the subsidies by the NS FA and Terengganu state government.