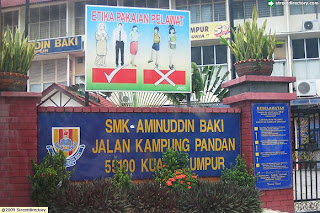 The KL Football Association (KLFA) are hoping to realise their dream of turning school fields into sporting hubs for the community.

KLFA president Astaman Abdul Aziz watched last week's edition of Bola@Mamak and immediately called me when I spoke about the lack of playing spaces in KL.

"Are you on air now?" was his first question.

Astaman then went on to explain;

"By laying artificial turfs on school fields, we can address the problem of lack of playing fields in KL and we will be able to see more youngsters take up the sport on a proper surface."

I do hope KLFA's ambition will be supported by the powers-that-be and corporate bodies. After all this is in line with the RM50 million allocation made by Prime Minister Najib Tun Razak in the 2012 Budget recently.

HD says: At least this will ensure KL will continue to have fields.
Astaman Abdul Aziz football KLFA