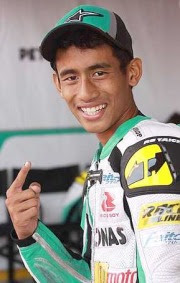 UPDATE (5.50pm): Azlan Shah Kamaruzan claims he did not issue any statement for an apparent outburst over the selection criteria for the Moto2 wildcard as seen here.

I refer to the e-mailed press release sent out to the media on October 5, 2011, which had subsequently been published in several national newspapers, television and radio stations.

I wish to clarify that the press release was never authorized by either myself or team Boon Siew Honda Malaysia Racing, nor had we been contacted by anyone representing the media on that matter.

This incident has tarnished my name and reputation as a professional rider. Towards that end, my team views this matter seriously and we will be making a police report as this could affect my future with my team and my sponsors.
With this statement, I appeal to the Malaysian media to help me clear my name.

Disseminated by Global PR Sdn Bhd, on behalf of Azlan Shah Kamaruzaman and Team Boon Siew Honda Malaysia Racing
-------
Youngster Hafizh Syahrin Abdullah (pic) and the experienced Zamri Baba are the wildcard entries for the Moto2 event in the Malaysian Motorcycle Grand Prix at the Sepang International Circuit from Oct 21-23.
Both riders will represent Team Petronas Malaysia in the GP.
This is clearly Hafizh's big break as he published in The Star today.
Zamri is set to burn rubber with the new MD2011 while Hafizh will utilise the MD2010 machine.
For more information on the Malaysia MotoGP, kindly visit the Sepang International Circuit's website.
Pic taken from The Star.
HD says: Time to get into the MotoGP fever.
Hafizh Syahrin Abdullah MotoGP Petronas Zamri Baba