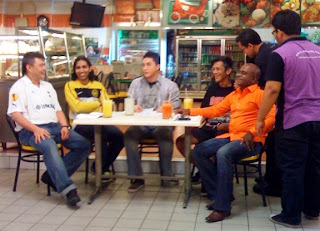 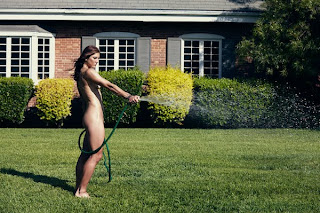 I was a guest on Bola@Mamak (Astro channel 811) earlier.

The others involved in the show were BFM's Ross Yusof, Anand - or better known as the Orangeman - of HooHa!, concert organiser Leonard Chua who is also a loyal Tottenhan Hotspur fan since 1979 and host Adrian Jalaludin. (pic right)

It is supposed to be more of an EPL programme but the producer Nicholas John was bold enough to incorporate a handful of topics surrounding our national team.

Prior the show I was 'forced' to sign up with the Malaysian Tottenham Hotspur Fan Club. Spurs fans Syahizan Amir Abdul Wahab - a legal eagle - and Andrew Lim came armed with forms and I was left no choice but to part ways with RM100.

During the show we spoke about Australia-Malaysia clash, the dilemma faced by Olympic coach Ong Kim Swee and the lack of pitches in the country.

There was also a debate surrounding USA goalkeeper Hope Solo's (pic left) decision to strip for the camera.