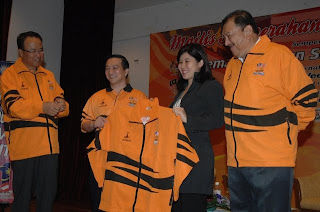 As I was munching on some muruku while watching Enthiran on RTM2, I received not one but a handful of phone calls regarding the SEA Games flag handing ceremony next week.

After exchanging Diwali greetings, I was told Mesuma Sdn Bhd will not be invited to hand out mementos to the VIPs during the ceremony.

The ceremony is hosted by the National Sports Council (NSC). FYI, the Olympic Council of Malaysia (OCM) -the main body when it comes to major multi-event Games including the SEA Games - used to host such events.

We all know about the soured relationship between Mesuma and NSC. To refresh one's memory, read here.

Note that Mesuma remains as the official attire for OCM. All athletes - especially the national bowlers - will don Mesuma's attire during the SEA Games.

Yet they aren't invited?

But I guess you don't invite the baker of your cake to your birthday party eh?