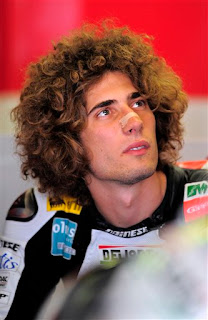 It was an emotional weekend in the world of sports.

New Zealand edged France 8-7 to win the Rugby World Cup at home, Manchester United suffered a horrible 6-1 defeat to Manchester City while world No 1 shuttler Lee Chong Wei failed to win the Denmark Open after losing 21-15, 21-18 to Chen Long of China in the men's singles final.

It also marked a black spot in the Sepang International Circuit's (SIC) history of hosting the MotoGP after rising star Italian Marco Simoncelli (pic) died at Turn 11 in Lap 2.

Those who managed to see the final moments of Simoncelli negotiating the lap, especially the visual from Colin Edward's bike before Dorna pulled if off from Youtube, could see how Simoncelli somehow lost control with his left leg raised too high in the air, slipping off his bike into the paths of Edwards and Valentino Rossi.