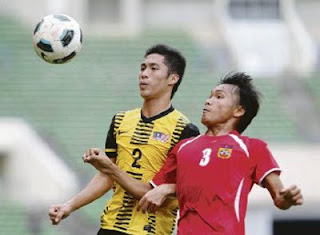 Who cares if Ong Kim Swee has taken the Olympic team to the final stage after a really long time?

Fact remains, Kim Swee will certainly feel the heat if he fails to defend the Sea Games title in Jakarta next month.

Kim Swee's dilemma was written here. But nothing was done to help him in his cause.

The stakeholders, who excel well in hogging the limelight and stamping their faces in front of the cameras, demand Kim Swee's lads win the gold medal.

Realistically, going beyond the Group stage will be a bonus as we are roped with Singapore, Thailand, Cambodia and Indonesia.

Indonesia are playing host and have every reason to hunger for the title. Thailand would like to show to the region they are back while Singapore had recently defeated Malaysia and would like to prove their youngsters can do the same.

Cambodia, meanwhile, are no pushovers.

Kim Swee's lads managed a 4-1 win against Laos in a friendly match yesterday. But Laos were leading 1-0 at half time.

Nevertheless, all the other countries feel their teams will face an uphill battle as seen here.

Could it turn out to be an open affair after all?