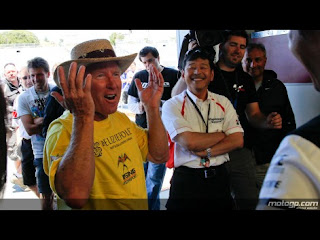 The Malaysian MotoGP has been part of the World Grand Prix calendar since 1991.

It started at the famous Batu Tiga Circuit before the race was held at the Pasir Gudang circuit in 1998. Among the big names then were Mike Doohan, Wayne Rainey and Kevin Shwantz.

Those who grew up in the 80s would remember the likes of Eddie Lawson and Freddie Spencer while the legends of the scene are Kenny Roberts Sr (pic) and Giacomo Agostini.

The GP then made its way to the Sepang International Circuit since 1999.

My association with the MotoGP started when my late dad took me for an outing at the Shah Alam circuit when I was rather young.

As a journalist, I managed to interview the likes of Kenny Roberts Sr, who was then the team principal of the now defunct Team KR, Casey Stoner and Loris Capirossi.

My name, alongside many others, was placed on the right side of the bike just below the seat as Team KR raced for the final time at the Valencia GP in 2007. It was Team KR's way of saying thank you to the fans.

My mechanic Sunny Oh, meanwhile, has a brother Jeffery who works with Rizla Suzuki.

SIC is now gearing up for another Malaysian GP scheduled on Oct 21-23.

It's been 20 years but the search continues to unearth Malaysian talents for a full MotoGP season.

Teluk Intan born Shahrol Yuzy enjoyed a handful of stints in the past and now we have Zulfahmi Khairuddin riding for AirAsia-Sic-Ajo Team in the 125cc event.

But I remember interviewing Stoner who, at age 18, had just ventured into the 125cc category.

“I remember seeing a couple of Malaysians trying out in Europe but they returned early as they couldn’t adapt to the weather.”

Is this one of the main reason to why no Malaysians have ever made an impact in the MotoGP scene?

Or is it because motorsports is no cheap business despite the tax exemptions by the government.

We have skillful mat rempits and I wonder how would they fare with bigger and better bikes.

Above all, I bet Valentino Rossi can't do this.

HD says: Looking forward to another exciting battle in Sepang.