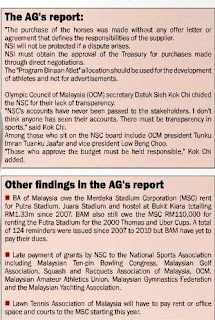 Everyone is suppose to adhere what the National Sports Council (NSC) says.

But what happens when the NSC horses around with tax payers money?

In 2008, Rizal Hashim called it a Malay Mail scoop after it was revealed NSC spent RM22.4 million on professional services, celebrations and hospitality.

Then we had NSC purchasing two premier chalets in Port Dickson worth RM850,000.

Yesterday, the Auditor General Report 2010 revealed millions of Ringgit were spent on horses that could not perform and advertisement campaigns from money allocated for sports development.

The Olympic Council of Malaysia has demanded for transparency.

But don't two key OCM personnel supposedly sit within the NSC Board?

Don't they know what NSC spends on?

Shouldn't the NSC notify the Board of such spending?

Most importantly, is anyone bothered?

Note: National Sports Institute was tasked to prepare the athletes and horses for the World Endurance Championship in 2008. However, the grants from the Treasury then was channeled to NSC. The grants came in late resulting the rush to buy the horses which saw most of the horses not fit and did not comply with the requirements set by FEI. However, the need to use development funds for advertisements remains unclear.