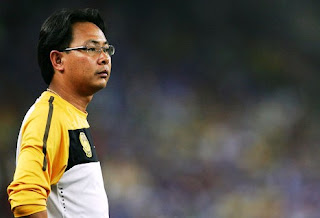 A lot has been said about the Sea Games and Olympic qualifiers' fixtures next month as seen here.

But time is running out for coach Ong Kim Swee (pic) . And he is certainly feeling the pressure.

The Sports Ministry - having much aspirations and dreams - is determined to see Malaysia defend their Sea Games title. The Sea Games final is usually held on the final day of the regional meet (Nov 22 in this case).

But Malaysia is scheduled to play Syria in Bukit Jalil on Nov 23. That's hardly 24 hours of rest when Fifa stipulates players need 48 hours to rest.

Any coach in Kim Swee's position will "ditch" the Sea Games campaign and focus on the Olympic qualifiers instead.

But will Kim Swee be allowed to do so? Will the stakeholders and the fans understand?

Don't expect Kim Swee to coach both teams while Syria will not be fooled to reschedule their meet to the convenience of Malaysia.

HD says: Kim Swee is in a difficult position no one can ever understand.
football olympic Ong Kim Swee Sea Games