Where are the hockey fans? 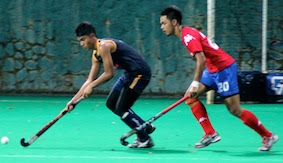 UPDATE 5.40pm: It seemed like yesterday when I spoke to National Sports Institute CEO Dr Ramlan Aziz about the fitness levels of athletes and he did mention a particular team sport. In fact it was in 2009 when Ramlan shared some statistics with me and this was a line from the story then

Smoking was also said to be one of the reasons why our hockey team failed at the pre-Olympic tournament last year.

Read the full report here.
---
I always have a soft spot for hockey.

I started writing about schools hockey during my early days. R.Vivekananda was a school teacher and coach for Royal Military College back then and I remember writing about Kevinder Singh who was only 15 back then.

The support for hockey then was rather good as you would fellow school mates and family members showing their support especially in the final - until the organiser of one zone in KL decided to "ban" supporters from attending the stadium due to "security reasons".

I kept tabs on the domestic hockey leagues and even attended the World Cup held in Bukit Jalil in 2002. We had the crowd and there would also be this bunch of folks banging the dhol and kompangs as they cheered on their teams. I was told that the bunch of hardcore fans were former players from Kelab Aman but they are no where to be seen today.

When I asked several coaches and observers of the on-going TNB-Malaysian Hockey League, this is what they said:

"The standards are not like what it used to be. It is pathetic," said a coach.

"You only get a handful of spectators, that too comprising of the players' family members or players from other teams who are getting ready for their match which will be played next," said a veteran player.

Therefore it is not surprising to see KL Hockey Club slam a dozen goals past SSTMI to register an emphatic 19-0 aggregate win in the quarterfinal of knock out stage for the TNB Cup.

HD says: Perhaps the Malaysian Hockey Confederation, with its 12 vice presidents to boast, could look into this. After all, MHC is supposed to be the national body according to international regulations eh.
hockey malaysian hockey league