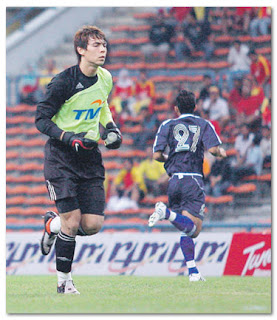 Irfan Bakti seems bullish of Terengganu entering into the final.

However, P.Maniam's Selangor could find their Mission 33 campaign come to an end in the return leg semi final tonight.

Terengganu secured a 2-0 win in the first leg at the Shah Alam Stadium. Selangor's biggest problem is finding the goals. The Red Giants simply lack sting up front.

Negri Sembilan, meanwhile, beat T-Team 4-2 in their first leg semi final clash and are hoping to extend their lead in Paroi when both teams meet in the second leg.

So could it be a Terengganu-Negri final after all?

Here's a question, had it been another team instead of Selangor suffering from a deficit, would it steal the headlines as well?

That aside, Liverpool-born Syed Adney Syed Hussein (pic) has a gigantic dream of returning to Selangor next season. Read it here.